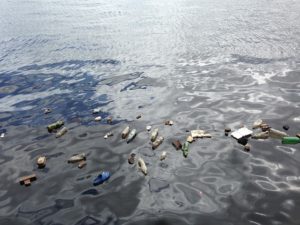 The larvacea is ​​an unusual animal: a transparent relative of ascidia and salpa that swims in the ocean, filtering the water in search of food with the help of a sticky mesh, the size of a meter in height.

However, it turned out that representatives of this class of shells play an important role in the processing of microplastics, which fell into the ocean: larvacea catch and eat plastic particles, throwing them with their feces and used filters on the seabed.

The main problem is known: plastic waste pollutes the ocean. Also large-scale plastic dumps located at depths in the Arctic Ocean and on the beaches of uninhabited islands. The remnants of plastic bags, fishing nets or consumer goods pollute the water and pose a mortal danger to birds and marine animals. Many of them die, because they mistakenly eat up plastic. A plastic waste comes to almost 10 million tons annually.

Even more difficult is the situation with microplastic clogging of the sea. In some places almost five millimeters of particles float in the water like organisms. Only with the waters of the Rhine flows about 191 million plastic particles in the direction of the North Sea every day.

Microplastic occurs as a result of the decomposition of plastic, in particular waterproof fabric, cosmetics and other consumer goods, and is transported into the ocean by sewage. Here he threatens animals that eat microplastics and with a full stomach experience hunger, from which they die. On plastic surfaces, harmful substances accumulate and increase pollution.

However, where the microplastic accumulates in the ocean and how it decomposes beneath the water surface, it is only partially known. Therefore, it is difficult for biologists to assess the danger that is hanging over different marine inhabitants.

Kakani Katija and her colleagues from the Monterey Bay Aquarium Research Institute have discovered unknown plastic eaters that live in the open ocean. The researcher wanted to find out the behavior regarding the food of the big larvacea bathochordaeus charon. It belongs to the shells and is rather an inconspicuous creature: it resembles a tadpole, a few centimeters in size. However, in order to filter out their food from the water – organic particles – this animal creates a filter grid of more than a meter in size. These slime-covered gear float on the water, and surrounds their contaminants. Then the bathochordaeus charon eats them. Over time, the filter heavily clogs the inedible particles, then the animal dumps it, and this delicate structure sinks at the bottom of the sea.

To get a closer look at the nutritional habits of this unique marine inhabitant, Katia and her colleagues used the work of remote control. With it, scientists dived into the canyon of Monterey – an underwater gorge in front of the California coast, in which there are many larvacea.

Near the filter gear of these animals, the underwater robot threw out many colored fluorescent plastic particles of various sizes and took pictures of what was happening. It turned out that in 11 of the 25 subjects-larvacea the microplastic board met in the internal filters of a delicate design. When these filters were contaminated, the bathochordaeus were dumped, and they were drowned together with the glued microplastic on the seabed.

“This transportation occurs relatively quickly, 800 meters a day,” Katia said with colleagues. Such elimination of microplastic material leads to the fact that it significantly disappears from water much faster than usual – and this has advantages. “A quick fall to the bottom reduces the likelihood that these particles will be eaten, caught by animals or that they will decompose in water,” the scientists explained.
Surprisingly biologists, not all the larvacea neglected the microplastic that stuck to their filters – they ate it as if it were food. The colored plastic particles were then visible in the translucent intestines of the animals. Subsequent observations revealed that after about 12 hours the microplastic passes the intestine of the apodicular and then drowns on the bottom with their feces. Due to this, the process of transformation into a precipitate of plastic particles is also accelerated.

“Our results tell us about a new biological transport mechanism that can transport a large amount of microplastic from the surface of the water to a depth,” the scientists state. They assume that not only larvacea perform such work, but other animals that filter water and that live in the middle and upper water layers. Thanks to such activities, these organisms can reduce the impact of pollution at least in their region of residence.

However, at the depth of the sea, the microplastic should not be considered completely defused. After all, in these regions live animals that absorb these particles, from which they can die, scientists say. “To this day, no one knows exactly what is happening with plastic in the oceanic depths,” says Katia. In her opinion, the following studies are needed in this area.