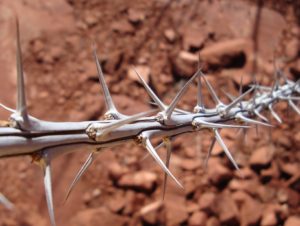 To date, the human impact on the environment has led to an environmental crisis on the entire planet. This page examines the most important problems that we are facing, and indicates a number of measures that correct the situation.

Soil erosion. Erosion of soils occurs when the fertile surface layer is destroyed by rain and winds. Ways of solving the problem:

Acid rain and other pollution. Decision:

Descent of deserts. This occurs where poor, arid lands, because of their active use, are turning into a desert. Solutions:

Destruction of the natural habitat. Decision:

Destruction of the ozone layer. The protective ozone layer in the atmosphere is threatened with destruction. The only way out:

Inefficient use of natural resources. Solutions:

All the measures proposed above, it is desirable to implement at the world level. This requires closer international cooperation, especially between rich and poor countries. The whole trouble, however, is that politicians usually care about the benefits for their countries without thinking about the future of the whole world. Many believe that even these measures are clearly inadequate and that humanity must radically change its way of life. Environmentalists join forces to protect the environment. Today in the world there are many charitable organizations that successfully help the poorest inhabitants of the planet. They specifically help communities to solve their problems without violating local traditions and lifestyle. They use environmentally friendly mechanisms, such as wind power generators in Africa. Sunflower is one of the symbols of the “green” movement. It symbolizes the revival of nature (in countries that pay particular attention to environmental problems). Ecological problems are important for the whole world, but we can contribute to their solution. Even small changes in the way of life of each of us will mean that the situation and the whole began to improve. This book tells you where to start. If you want to know about this in more detail, contact the environmental protection organization.

One of the most important problems facing the world community is the protection of the natural environment and the preservation of the sustainable development of human civilization. The catastrophically rapid increase in the population of the Earth, the steady growth of its material and spiritual needs, the expansion of the areas of the use of natural resources, the introduction of new and new technologies, the increase in production in the energy, industry, agriculture, construction, transport take place with a profound transformation of natural landscapes. Such transformations lead to the emergence of new, previously unknown biosphere artificial landscapes. Modern scientific and technological progress and expansion of interstate economic ties have led to a sharply increased burden on the environment and increased contradictions in the interaction between the environment and human society.