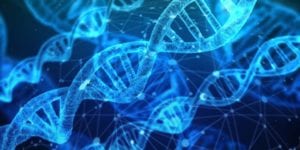 In the genetic code of a single cell made more than 13 thousand changes.

Using a modified version of the technology of gene editing CRISPR, a group of researchers from Harvard University successfully made 13,200 changes to the genetic code of a single living cell. This was a new record in this area, far surpassing the previous similar record in terms of the number of changes, but the most incredible was that the cell managed to survive after all modifications. Such technology can be used in the future to “clean” human DNA from useless or dangerous genetic information. In addition, new technology can be used to create completely new types of synthetic life.

The goal of this work is to create a “pure genome” that will make it invulnerable to viruses of any type of tissue of artificially grown human organs. This process, called genome transcoding, involves a minimum of 9,811 precise changes. The first type of cells that went through the process of transcoding the genome in the laboratory was universal stem cells.

Researchers have focused on removing and disabling the problematic type of a piece of genetic code, a transposon, known as LINE-1. Such transposons are known as “jumping genes” because they are able to “jump” from one location to another. Such tanspozons are quite common in the mammalian genome, including in the human genome, a little less than half of the entire genome falls on transposons, the functional utility of which is still the cause of disputes between scientists.

The LINE-1 transposon accounts for about 17 percent of the entire human genome, with many problems associated with it, including gene degradation, neurological diseases, and aging. In the transposon code LINE-1, many mutations have accumulated over time, and this code does not contain anything useful for humans.

To clean the genome, scientists first tried to use conventional CRISPR technology to search for and destroy LINE-1 transposon sequences. However, this approach worked well when there were several target sites in the genome, but after the CRISPR technology worked on hundreds and thousands of sites, the genome turned into a continuous useless “mess”, which led to cell death that went through the procedure.

After the failure of the traditional CRISPR technology, the scientists decided to use its modified version. Instead of “cutting” the DNA, the new variant simply changes the code, replacing, for example, G with A. Such a replacement does not cause catastrophic effects and allows editing of thousands of sections in one strand of DNA, keeping the cell completely in a viable state.

The 13,200 changes produced are nearly half of the 26,000 active transposons LINE-1 in the human cell genome. “We hope that in the near future we will be able to eliminate all 100 percent of the active elements of LINE transposons,” the researchers write, “However, before that, we will need to conduct a series of comprehensive studies to assess the effects of such a massive intervention in the genome. cause side mutations that will become a big problem. For this we will need new biological controls, new experimental methods and new software algorithms from the so-called domain bioinformatics. ”