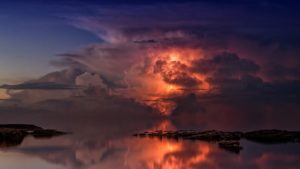 Air pollution is one of the main preventable causes of death, the emergence of which mankind owes its activities. Now the problem is more relevant for China, India and Thailand, but it poses a serious threat to the health of Europeans and the United States. In the event of non-compliance with the conditions of the Paris Agreement on the abandonment of coal-fired power plants and the burning of fossil fuels, it may soon become the main one for the whole world.

Air pollution in 2018 was the cause of 8.8 million early deaths worldwide — almost double the number of people who died from HIV, malaria and tuberculosis, four times as many as were killed in accidents. Chemical pollutants and particles that can penetrate biological barriers kill more people than smoking tobacco. Since 2016, the number of deaths for this reason has increased by 2.3 million.

Almost half of the early deaths are associated with cooking in stoves and using solid fuels — such cases are characteristic of poor countries and regions. However, the second half is caused by pollution, the cause of which is transport, the work of industrial enterprises and power plants, the construction of buildings and heating.

The situation is constantly deteriorating as the world’s population grows and may increase to 9 billion people in the near future. This, in turn, leads to the growth of cities, an increase in the number of cars and industrial enterprises.

Problems with ecology are not limited to actively developing countries of Asia – India and China. According to experts, air pollution will cause the death of 800 thousand Europeans by the end of 2019, and in the whole world this figure will be about 9 million deaths per year and will continue to grow.

It is believed that air pollution leads to various respiratory diseases. However, it also causes damage to the cardiovascular system – such diseases lead to twice as many deaths as respiratory. The main reason is microscopic dust particles that penetrate the body’s defense systems and even through biological barriers.

Soot, salts and heavy metals
Weighted dust – dry or wet – of various sizes is present even in the cleanest air. In large cities or areas near industrial enterprises, fine dust is more common – PM 2.5 particles, whose diameter is less than 2.5 microns (less than 3% of human hair thickness).

Along with larger particles (for example, PM 10) PM 2.5 can have a different chemical composition – from carbon and soot to salts and heavy metals. In different cities, the composition of the particles is different and depends on the substances that are most actively released into the air.

Due to the extremely small size of such particles bypass the nose and mouth and penetrate into the circulatory system, affecting the lungs and the cardiovascular system. High concentrations of particles as small as a few microns in the air lead to smog and cause chronic diseases, including asthma, bronchitis and heart failure.

Chemical pollutants
In addition to small particles of dust, there are primary chemical pollutants caused by human activity in the air. These include sulfur dioxide – a substance released during the eruption of volcanoes, and when burning fossil fuels. When released into the atmosphere, the substance combines with nitrogen oxide and falls in the form of acid rain.

Hazardous pollutants include volatile organic substances (VOCs), which are part of many industrial and consumer products. Among them – paints, adhesives, cleaning products and personal care products. Researchers believe that these products are becoming the dominant pollutant as people abandon gasoline and diesel cars in favor of electric cars.

The most hazardous to health are non-methane VOCs. Increasing the concentration of benzene, toluene and xylene in the air can lead to leukemia and other dangerous diseases. Methane VOCs are extremely effective greenhouse gases that destroy the ozone layer and accelerate the rise in global temperature.

The third most dangerous chemical pollutant is ammonia, which is widely used in agricultural fertilizers, as well as for the synthesis of pharmaceuticals. Inhalation of ammonia in high doses results in toxic pulmonary edema, severe damage to the nervous system, and loss of vision.

How rain can clear the air
Purification of air from pollution is a long process. Especially to achieve the final result, which requires compliance with the terms of the Paris Climate Agreement. But PM 2.5, PM 10 and chemical pollutants are already having too much influence on people’s health, and governments are trying to take steps to reduce this effect.

One way is to sow the clouds. This concept was proposed by chemist Vincent Schaefer in 1946. The scientist discovered that cloud condensation nuclei, tiny particles around which water is formed, can be artificially produced. Schaefer experimented with dry ice, but later experiments used airplanes that sprayed various chemical compounds at a height of cloud formation to control precipitation. For example, the US military resorted to cloud seeding in the 1960s, trying to prolong the monsoon season in Vietnam and win the war.

Scientists believe that artificial rain will reduce the concentration of harmful substances in the air – raindrops should collect dust and chemical elements and nail them to the ground.

The first experiment on air purification in China with the help of cloud seeding was carried out by the South Korean government. Chinese winds periodically blow from the Yellow Sea to Seoul, transferring heavily polluted air from China. The South Korean government accuses China of exceeding fine particles (PM2.5) in the atmosphere, which are gradually moving to the territory of South Korea.

Researchers sprayed a solution based on silver iodide in the atmosphere — it was planned that water droplets condense around heavy particles and fall to the ground as precipitation. This as a result was supposed to help cope with air pollution and smog. However, the experiment failed – the resulting rain was too weak and lasted only a few minutes.

Korea has already offered China to join the initiative – so far, the government of the latter has struggled with air pollution only with inefficient methods: for example, using ground-based water cannons. On the other hand, China has experience in seeding the clouds – authorities resorted to this method in 2008 to prevent precipitation during the Beijing Olympics.

The authorities of Bangkok in January 2018 also tried to fight smog, enveloping the city, by sowing clouds with silver iodide and irrigating the airspace above the city with water from UAVs. None of these attempts to cope with pollution brought tangible results.

What’s next?
Despite efforts to clean the air, they all look either too local or ineffective. In order to effectively combat pollution, people will have to change their habits – first of all, abandon the daily use of cars with gasoline and diesel engines.