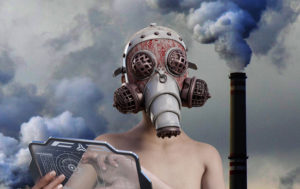 “Air pollution is an environmental problem”. This phrase does not reflect to the slightest extent the consequences that the violation of the natural composition and balance in a mixture of gases called air has in it.

It is not difficult to illustrate such a statement. The World Health Organization provided data on this topic for 2014. Due to air pollution around the world, about 3.7 million people died. Almost 7 million people died from exposure to polluted air. And this is for one year.
The composition of air is 98-99% nitrogen and oxygen, the rest: argon, carbon dioxide, water and hydrogen. It consists of the atmosphere of the Earth. The main component, as you can see, is oxygen. It is necessary for the existence of all life. They “breathe” the cells, that is, when it enters the cell of the body, a chemical reaction of oxidation occurs, as a result of which the energy necessary for growth, development, reproduction, exchange with other organisms and the like, that is, for life, is released.
Pollution of the atmosphere is interpreted as the introduction of chemical, biological and physical substances that do not belong to the atmosphere, that is, a change in their natural concentration. But it is more important not to change the concentration, which, undoubtedly, occurs, but the decrease in the air content of the most useful component for life – oxygen. After all, the volume of the mixture does not increase. Harmful and polluting substances are not added by simple addition of volumes, but destroy and take its place. In fact, there is and continues to accumulate a lack of food for the cells, that is, the basic nutrition of the living being.
About 24,000 people die of hunger per day, that is, about 8 million a year, which is comparable to the death rate from air pollution.

Types and sources of pollution

Air was polluted at all times. Volcanic eruptions, forest and peat fires, dust and pollen of plants, and other atmospheric releases of substances normally unacceptable to its natural composition, but caused by natural causes are the first type of air pollution origin – natural. The second is as a result of human activity, that is, artificial or man-made.
Anthropogenic pollution, in turn, can be divided into subspecies: transport or resulting from the work of different types of transport, production, that is, associated with emissions into the atmosphere of substances formed in the production process and domestic or resulting from direct human activity.
Air pollution itself can be physical, chemical and biological.
Physical include dust and solid particles, radioactive radiation and isotopes, electromagnetic waves and radio waves, noise, including loud noises and low-frequency oscillation and thermal, in any form.
Chemical pollution is the ingress of gaseous substances into the air: carbon monoxide and nitrogen, sulfur dioxide, hydrocarbons, aldehydes, heavy metals, ammonia and aerosols.
Pollution by microbes is called biological. These are various bacterial spores, viruses, fungi, toxins and the like.

Human activities significantly affect the environment. So air pollution became the first ecological problem, which people noticed. The disastrous effect leads to a change in the background and chemical composition of the atmosphere. Clean air is necessary for the functioning of many natural processes. It is required for life to representatives of flora and fauna, participates in chemical processes in the water areas, delays heat on the ground, etc.

The high rate of industrial development in developing countries is the cause of a sharp increase in air pollution. Low quality of technology and lack of material for modern treatment facilities lead to a large number of emissions. Also one of the most important reasons is the use of low-quality fuel. So, in Delhi and Calcutta, the dust concentration in the 80s exceeded the same indicator of Europe in 25, and the USA in 20 times.

The ecological situation of the urban areas of the countries of the East is at a critical level, since the peculiarity of these countries is the concentration of the population in a small number of large cities.

After a significant increase in the standard of living and material income of the inhabitants of Asia and Africa, the number of vehicles increased, which created a recently unknown problem of exhaust gases. The deterioration of this situation is due to the inability of most residents to purchase modern, technology cars. Also, using a supported car is associated with a phenomenon such as noise pollution. At present, this problem threatens the whole of Eastern Europe and the United States.

The lack of air purifying facilities can lead to a massive loss of acid rain, which will greatly affect the environmental situation.
At present, the countries of Europe and America are conducting air purification, but it will be possible to restore the level of purity as it was before only after centuries.