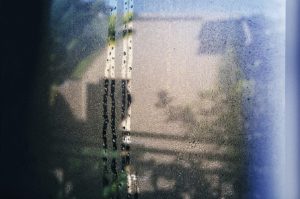 The evaporation of window panes is often perceived as a window joinery defect. Most often, however, this is a mistaken belief.

The condensation of water vapor on windows is a natural physical phenomenon. It consists in the fact that as a result of contact of moist and warm air with a surface with a correspondingly lower temperature, the air cools down to the saturation state and releases part of the moisture which condenses on the surface of the insulating glass, causing it to fog.

Water vapor on the inside of the window pane

Evaporation of window glass from the room side does not have to be caused by a window defect. This is proof of the high window tightness. The reasons for this phenomenon are to be found in excessive humidity of indoor air and poor ventilation in the room (insufficient air exchange).

Through carefully insulated windows, air with high humidity created during domestic activities, such as: cooking, washing, ironing or bathing, can not get out, which is why excess water vapor settles on the coldest surfaces, i.e. window panes.

How to prevent the condensation of water vapor on the surface of the glass?
In the case of evaporation of glazing on the inside of the glazing unit, this can be prevented by ensuring that fresh air is supplied to the rooms, eg by regular airing, even cold, when low temperatures outside do not encourage us.

The recommended air humidity in living areas is 40-50%. Excess moisture should be removed outside. Otherwise, a natural phenomenon of condensation of water vapor and condensation on the windows will be created.

Very often the evaporation of glass inside rooms is the result of poor ventilation. Therefore, first check the operation of gravity ventilation or replace it with mechanical ventilation. In addition, you can opt for windows with microventilation fittings. This function ensures a constant supply of fresh air to the room, because it reduces the squeegee pressure to the window frame (unsealing the sash). Microventilation is started by adjusting the window handle.

In rooms exposed to high humidity, it is worth to apply glazing with a low Ug heat transfer coefficient (the lower the Ug value, the quicker the “warmer” set), with a warm spacer frame, which eliminates the formation of interior stain due to the absorbing absorbent inside the pane her. It is best if the frame is made of stainless steel or plastic, because it reduces the probability of the so-called thermal bridge (a place with inferior thermal insulation parameters through which heat escape occurs).

Window ventilators helpful in the fight against fogged windows

Remember that even the best window pane will not eliminate the phenomenon of evaporation with too much humidity in the room. In this case, it is advisable to equip the window with a suitable air supply device. The diffuser is devices mounted in the window (usually in the upper part) or in the wall. They allow for supplying air to rooms even when the windows are tightly closed. Available diffusers differ in efficiency (amount of air supplied) and acoustic insulation, i.e. protection against external noise.

Water vapor on the outer surface of the window pane

The condensation of water vapor on the external surface of the IG unit is a problem for modern windows. This phenomenon is caused by very high thermal insulation of this type of glass (ie a low heat transfer coefficient Ug). It causes that only a small amount of warm air gets out of the room. The outer pane remains cold and moisture condenses on it in the form of water vapor. Formerly, windows were characterized by inferior thermal insulation properties. Thanks to this, the outer pane was heated with heat escaping from the inside of the building. Of course, the main downside of these windows was the large heat loss.

The phenomenon of evaporation of windows on the outside of the window can often be found in areas with high humidity, e.g. near water reservoirs, where in the morning the air can be warmed up faster than window panes.

Water vapor inside the double glazing