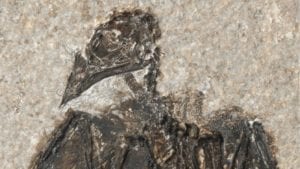 In the United States, well-preserved fossils of an ancient bird that could peck hard seeds were found, according to Current Biology. This is indicated by its beak, which resembles a beak. Eofringillirostrum boudreauxi, as the bird was called, lived about 52 million years ago.

The shape of the beak played an important role in the emergence of different species of birds, so when studying the evolution of birds, researchers first of all pay attention to this feature. Perhaps the most closely associated with the study of the shape of the beak is the passer-shaped – the most numerous order of birds, which includes about 5.4 thousand species. The variety of beak shape allows passerine to catch insects, eat carrion, peck hard seeds and drink nectar from flowers. However, the evolution of the beak in passerines has not been studied as yet, since researchers rarely find their fossils.

In a new study, paleontologists Daniel Ksepka and Lance Grande from the Field Natural History Museum and Gerald Mayr from the Zenkenberg Research Institute describe two ancient passerine fossils. Scientists attributed them to one genus and two new species. The fossils of one of the birds were found in Wyoming in the Green River sediments. Eofringillirostrum boudreauxi, as scientists called it, lived in the Middle Eocene, about 52 million years ago. The remains of the second bird, Eofringillirostrum parvulum, were found in southwest Germany. She was much younger than E.boudreauxi and lived about 47 million years ago. In size, both birds were similar to the Canadian nuthatch – about 11 centimeters in length and weighed about ten grams. E.boudreauxi was slightly larger than E.parvulum.

The birds had a short upper part of the beak of conical shape, which narrowed to a thin tip. In appearance, it resembled the beak of a modern American chizh, which feeds on seeds, including sunflower seeds. “These beaks are well adapted to feed on small, hard seeds,” says Daniel Ksepka. “The most ancient birds, apparently, fed on insects and fish. Some may have eaten little lizards. Prior to this discovery, we knew little about the ecology of early passer-shaped birds. E.boudreauxi gives us important information about her. ”
Previously, ornithologists had attracted volunteers to study the evolution of bird beaks. Scientists conducted a 3D-scan of the beaks of more than two thousand species of birds and laid out models on the site, and volunteers marked them out.