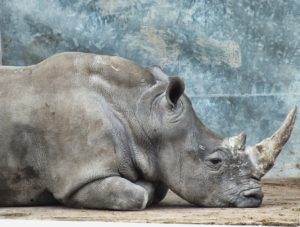 Thousands of scientists are calling on the world to think better to preserve the conditions for the existence of the living on the planet.

More than 15 thousand scientists from 184 countries signed the document Prevention of Mankind, which describes the main threats to the existence of all living things on the planet, says the journal BioScience.

This document became the second, the first was signed 25 years ago. During this time, as scientists say, some environmental problems have only become more serious.

People and nature are moving towards collision with each other

An active group of environmentalists from the Union of Concerned Scientists and about 1,7 thousand independent scientists, including most Nobel laureates, in 1992 issued the first warning to World Scientists Warning to Humanity.

The initiator of the document, which begins with the words “People and nature are moving towards collision with each other,” became the founder of the Union and Nobel Prize winner in physics Henry Way Kendall.

Scientists predicted that a person would destroy life on Earth, because of its activities, ozone holes are formed, water and air are contaminated, forests are cut down, soil is depleted, and so on.

“If we do not take measures, many of our actions will put the future that we wish for humans, animals and plants, threaten and so change the planet that we will not be able to lead a customary life on it,” the scientists wrote in 1992.

For a quarter of a century it only got worse
The new Warning contains disappointing results from the first publication 25 years ago. The authors considered nine major threats to the existence of all living things that appeared as a result of human activity. 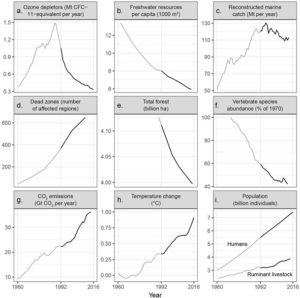 Change in key indicators over the past 25 years: a) emission of substances that deplete the ozone layer; (b) Fresh water per capita; (c) The amount of fish caught; d) the number of dead zones in the ocean; (e) Forest area; f) the number of species of vertebrates; (g) Carbon dioxide emissions; h) temperature increase; i) the total population of the Earth and the number of ruminants

The main problem is global climate change. Since 1992, the average temperature has increased by more than half a degree Celsius, and the annual carbon dioxide emissions have increased by 62 percent. The amount of fresh water available per person decreased by 26 percent.

Also, scientists noted a decrease in forest areas – about 120 million hectares were cut down, and the number of fish in reservoirs decreased. In the oceans, the volume of dead zones increased, in which the oxygen content became lower than necessary for the existence of marine creatures.

At the same time, the world population grew by 35 percent or two billion over 25 years, and populations of many species of mammals, reptiles, fish decreased by 30 percent.

“Mankind has become the cause of the sixth in the last half a billion years of mass extinction of animals and catastrophic loss of biodiversity, it will soon be too late to evade our trajectory of falling,” the document says.

However, the scientists noted some progress in increasing the share of renewable energy sources and reducing the release of substances (the gradual phase-out of chlorofluorocarbons) that destroy the ozone layer, thereby reducing holes.

Scientists offer a number of ways to solve the problem, including the creation of nature reserves, reducing the amount of food waste, introducing more environmentally friendly technologies, changing consumption patterns through economic incentives.

To develop new methods for improving climate, documentation, and assessing the current climate situation on Earth, an active group of scientists created a new organization, the Alliance of World Scientists.

The state of the climate on Earth at the moment, its susceptibility to anthropogenic influence and trends in its change are also discussed in the framework of the Conference of the Parties to the United Nations Framework Convention on Climate Change, which is being held in Bonn.

One of the consequences of anthropogenic impact on the Earth’s climate is the reduction in the number of animal species. Thus, it is human intervention that can lead to the complete extinction of northern smooth whales over a hundred years.

Individual scientists even argue that the current rate of increase in the carbon content in ocean water can trigger a massive extinction of marine animals as early as 2100. At the same time, the largest and smallest animals are in the zone of maximum risk.

The most ambitious international agreement
In 2015, 197 countries signed the Paris Climate Agreement, which aims to strengthen the global response to the threat of climate change in the context of sustainable development and efforts to eradicate poverty.

If the average temperature of the Earth’s atmosphere rises by about two degrees, then, scientists say, this can lead to dangerous and unpredictable climate changes – unprecedented floods, droughts and forest fires. And this in turn will trigger a new global wave of migration.

– limiting greenhouse gas emissions to a level where they will be fully absorbed by plants and oceans, until the end of this century;

– Countries themselves determine the contribution to the achievement of the goal and review them every five years;

– developed countries have some financial obligations – they should help other states in the fight against climate change.

The countries that signed the agreement, themselves determine the contribution to the achievement of the goal and review them every five years.

Developed countries have some financial obligations – they must help other states in the fight against climate change.

The Paris agreement is criticized for the lack of sanctions if the signatories fail to reach their goals or for lack of it.

Critics also point out that the phrase “fossil fuel” is not mentioned in the text of the agreement.