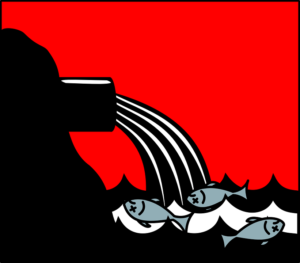 The main sources of pollution and clogging of water bodies are poorly cleaned waste water from industrial and communal enterprises, large animal husbandry complexes, waste from the production of ore minerals, hydropower construction, water mines, waste from processing and alloying of timber, dumping of water and rail transport, waste of primary flax processing, pesticides, etc. With the beginning of the navigation period pollution of the river fleet is increasing.

Pollutants, getting into natural reservoirs, lead to qualitative changes in water, which are mainly manifested in changes in the physical properties of its chemical composition, in particular, the appearance of unpleasant odors, flavors, etc .; in the presence of substances floating on the surface water and deposited at the bottom of the reservoirs.

The industrial waste water is polluted mainly by waste and emissions from production. The quantitative and qualitative compound of them varies and depends on the industry, its technological processes; they are divided into two main groups: those that contain inorganic impurities, including toxic, and those that contain poisons.

The waste water of the second group is thrown off by refineries, petrochemical plants, enterprises of organic synthesis, coke-chemical plants, and others. The wastewater contains various petroleum products, ammonia, aldehydes, resins, phenols and other harmful substances. The harmful effect of sewage of this group consists mainly in the oxidative processes, as a result of which the oxygen content in water decreases, biochemical demand in it increases, organoleptic parameters of water deteriorate.

Oil and petroleum products at the present stage are the main pollutants of internal reservoirs, waters and seas of the World Ocean. Getting into the reservoirs, they create different forms of pollution: oil film, floating in water, dissolved or emulsified in the water petroleum products that settled on the bottom, heavy fractions, etc. This changes the smell, taste, color, surface tension, viscosity of water, decreases the oxygen content, there are harmful organic substances, water acquires toxic properties and poses a threat not only to humans.

Among the products of industrial production, a special place in its negative impact on the aquatic environment and living organisms occupy toxic synthetic substances. They are becoming increasingly widespread in the industry, in transport, in communal households.

Harmful pollution of industrial water is phenol. It is located in the sewage of many petrochemical enterprises.

The population of the reservoirs is adversely affected by waste water from the pulp and paper industry. Oxidation of wood mass is accompanied by the absorption of a significant amount of oxygen, which leads to the death of caviar, fry and adult fish. Fibers and other insoluble substances clog water and worsen its physical and chemical properties. On the fish and on their feed – invertebrates – badly reflected alloys. From rotting wood and bark, different tannins are released into the water. Resin and other extractive products decompose and absorb a lot of oxygen, causing the death of fish, especially young and caviar. In addition, the alloys greatly pollute the rivers, and sank the log often quite clogging their bottom, depriving fish of spawning grounds and fodder places.

Nuclear power plants with radioactive waste pollute the rivers. Radioactive substances are concentrated by small planktonic microorganisms and fish, and then transmitted to other animals and humans through the food chain. It has been established that the radioactivity of planktonic inhabitants is thousands of times higher than the water in which they live.

Growth of the population, the expansion of the old and the emergence of new cities have significantly increased the flow of domestic wastewater into the internal reservoirs. These runoffs became a source of pollution of the year and lakes by pathogenic bacteria and helminths. To an even greater extent, pollute synthetic pesticides that are widely used in everyday life. They are widely used in industry and agriculture as well. The chemicals contained in them, entering with sewage to rivers and lakes, significantly affect the biological and physical regime of reservoirs. As a result, the ability of water to saturate with oxygen decreases, the activity of bacteria that mineralize organic matter is paralyzed.

Serious concern is the pollution of water bodies by pesticides and mineral fertilizers that come from the fields along with streams of rain and melt water. In connection with the intensification of livestock raising, more and more companies are aware of the drainage of enterprises in this field of agriculture.

Limited supplies of freshwater are further reduced due to their pollution. The main danger is created by waste water (industrial, agricultural and household), since a significant part of the used water returns to the water pools in the form of wastewater.