What the World Will Look Like 4°C Warmer
Micronesia went completely under water. Indonesia and Pakistan abandoned. Europe slowly turns into a desert. Welcome to the world where it has become warmer by 4°C. 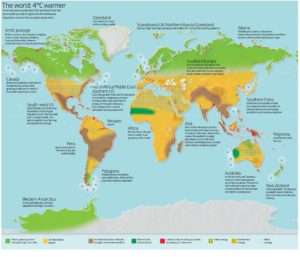 Western Antarctica is no longer bound by ice. “Smart” cities are flourishing in the new green-covered paradise lands. Northern Canada, Scandinavia and Siberia produce generous crops that feed hundreds of millions of climatic refugees, who from now on call these places home.

This map shows some of the likely effects that will occur if the average temperature on the planet rises to four degrees. It was created eight years ago, but it seems that the more time passes, the more relevant it becomes.

Usually on the maps covered with ice and snow Antarctica is indicated by white. On this map, the western extremity of the continent is marked as inappropriate green. However, literally, last week, new reports showed that Antarctica really became green.

Some serious scholars still raise doubts about global warming and involvement in this human activity, but it is, rather, a convenient position to ignore the associated problems and reluctance to do something to prevent a future catastrophe.

We are waiting for many suffering and painful changes, but also new opportunities and hope for the best

These are not the solutions that will bring us back to the climate that existed decades ago – they are dear and useless – but those that will work in the world, as it will be in the future.

To begin with, bad news. Brown marked the land unsuitable for living due to drought. We say goodbye to the East Coast of the United States, Mexico and Central America, to one-third of South America. Africa, Mozambique and Madagascar are also lost. Asia remained without much of the Indian subcontinent, including Pakistan, Indochina and almost all of Indonesia.

As the map shows, the last inhabitants of the south-west of the United States migrate to the north. The Colorado River will be a simple stream. Peru will turn into an uninhabited desert, Bangladesh and South India – abandoned. But in Pakistan there are still small isolated communities.

The orange color is not much better – uninhabited desert. This is a large part of the US and South America, almost all of Africa, southern Europe and Asia.

The desert has invaded Southern Europe, the rivers have dried up, there are no snow in the Alps. Mountain goats and other cold-loving animals now cling to the outskirts.

The regions marked with flood waters are marked in red – with warming by four degrees, the ocean level will rise by two meters. These plots look small, but a significant part of the population lives there. For example, in the US, the coastal zone occupies only 10% of the territory (excluding Alaska), but 40% of all inhabitants are concentrated there.

And now about good. The green areas indicate areas suitable for growing crops and the foundation of compact high-rise towns. This includes West Antarctica, which will become unrecognizable and will cover the points of tightly populated multi-tier cities. New Zealand, now practically not populated, will become one of the most populated areas.

Siberia and Canada, Great Britain, Scandinavia, Greenland and the north of Russia – all these will be zones with ideal conditions for living and providing food for the greater part of the planet’s population, which will find refuge there.

A warmer climate can even lead to the restoration of forests in some parts of the planet, including Sahel and Western Australia. The regions that turned into a desert will be left, but not useless: they are used to create solar farms and produce geothermal energy. The remaining energy will be generated by wind farms from the shores of South America, America and the North Sea.