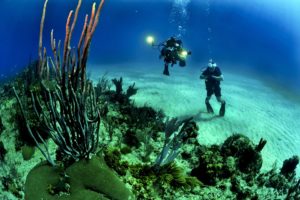 Over time, objects from concrete and stainless steel will turn into an artificial reef. In Florida, a museum of underwater art has opened – an underwater park with modern sculptures that will help restore the flora and fauna of a coral reef. The museum is located at an 18-meter depth a few miles from the coast of Walton County. The fact is that in this part of the Gulf of Mexico there are almost no reefs left, and now it is 95% composed of sandy uninhabited lowlands. With the help of sculptures, the founders of the museum hope to create an artificial reef and restore the population of marine inhabitants.

While in the museum there are only 7 exhibits selected at the international competition. To create objects, the artists used materials that are resistant to the underwater environment and contribute to the growth of corals and plants. Almost all sculptures are made of stainless steel or concrete. So, the artist Evelyn Tickle created an object of concrete, imitating a shell of an oyster. The composition of the concrete mix was developed by Tickle herself. The artist hopes that the sculpture will become a refuge for mollusks.

According to the founders of the museum, the park will expand every year. They hope that the place will be of interest not only for divers and ecotourists, but also for scientists who will be able to study the impact of artificial reefs on the ecosystem of the bay. Underwater parks are not only in the US, but also in Mexico, Bolivia and Honduras.

The Florida coral belt is the third largest in the world among barrier reefs. Stretched for 360 miles along the Atlantic coast of the state, the coral belt serves as a habitat for numerous species of plants and marine animals. However, recently coral reefs began to gradually turn into lifeless calcareous skeletons.

The disease and the death of corals over the past ten years are noted throughout the world. Experts believe that the cause of this phenomenon is pollution and rising temperatures in the oceans, which contributes to the development of pathogens. In Florida, entire areas of coral reefs turn into “underwater cemeteries,” and the State Department of Environmental Protection cooperates with federal, state and local expert groups in 2015 in an effort to identify the pathogen responsible for the death of corals, find antidotes against it and eliminate the causes of its growth .

However, so far the efforts of scientists have not been crowned with success. Coral disease continues to spread from one section of the reef to another. Particularly affected are coral-brains and star corals, which form the base of reefs. According to experts, even if the coral disease is stopped, the restoration of the reef will take many years.