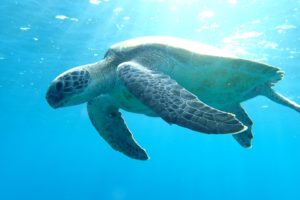 To control the populations of wild animals that are endangered, drones are much more effective than humans, in recent years the use of drones in such studies has increased at times.

Researchers from Duke University and the University of North Carolina at Chapel Hill began using unmanned aerial vehicles to count sea turtles threatened with extinction along the coast of Costa Rica.

It is very difficult to keep accurate records of such animals as sea turtles, as they spend most of their life in the sea, swim ashore only for laying eggs during the nesting season.

The calculation of sea turtles was usually done by people on a boat or by counting them on nesting beaches, which gave scientists only a small fraction of the information.

The drones used are equipped with high-resolution IR cameras. During flights, drones with a fixed wing were hovered at a height of 90 meters above the water, counting took place in the Ostional National Wildlife Refuge.

This function of the drones allowed the researchers to immediately see a wide area and discover the turtles under the surface of the water, they could not be seen from the boat.

During the season, it was possible to find hundreds of thousands of olive sea turtles coming ashore, the researchers estimated that at the peak of the season per square miles there were about 2,100 sea turtles. These numbers were much higher than scientists expected, which demonstrates how effective drones are, they give the researcher the best points of view for obtaining more accurate data.

“Our results confirm that drones can be used as a powerful tool for studying the number of sea turtles in the sea, drones have helped to determine the incredible density of turtles in the coastal habitat of Ostion,” said Vanessa Bézy, Ph.D., University of North Carolina, head of the study.

“The development of this method provides vital new ideas for future research and conservation of animal species.”