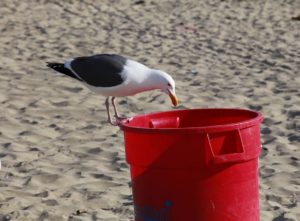 Unfortunately, garbage heaps have become a typical element of the urban landscape. They are found not only on the streets, but also in nearby forests and parks.

Recycling of secondary raw materials is not only an economical way of obtaining new products, once again using the same raw materials, but also a way to reduce the amount of debris. Containers for waste paper, glass, cans and plastic have recently become common in many countries. Due to the fact that sorting is already in the first stage, garbage gets to the landfill.

Enterprises that produce packaging materials can significantly reduce the amount of waste. For this, it is only necessary to abandon the production of unnecessary packages.

In addition, the packaging should be safe for animals (do not have sharp edges, etc.). It is also necessary to produce them from non-toxic materials, paper.

What can be done? Pollution of the environment creates a great danger for animals. Very often even a pet can raise and eat some kind of muck, which can lead to fatalities. Especially carefully you need to look after small dogs.

Environmental organizations are struggling with it, organizing garbage collection activities in which the population of a particular city or village participates. In recent years, such actions are held in many countries. In 1988, in the United States during the action on the coast, nearly 31,000 tin cans were collected from under soft drinks. A great benefit is brought by the actions that schools organize together with local authorities. As a result of such actions, debris is cleared of parks, small streams and forests. Everyone can take care that garbage does not pose a danger to wild animals. Before you throw the jar, you need to crush it, so that the hedgehogs can not move their mouth into the hole. Plastic bottles will not become a trap for animals if they are cut beforehand in half.

Damage to the environment is punishable by law. But it would be more effective to change people’s attitude to nature. It is necessary that everyone understands their responsibility and knows what irreparable harm to nature can be caused by environmental pollution.

Most of all, people are polluting the Earth. Every year on our planet there is a growing amount of debris, which is deadly dangerous for birds, mammals and reptiles. Many artificial materials do not decompose for decades, therefore it is necessary to carry out actions for cleaning and further processing of garbage.

WAYS TO SOLVE PROBLEMS. People, without hesitation, leave garbage in places of rest – on the shores of lakes or rivers, on the beaches; In the forest near your house or cottage, etc. We sometimes do not notice how many glass bottles, cans and plastic packages lie on the lawns or among the trees in the city park. People do not even know what the consequences of such a disparaging attitude toward nature are. Almost 50% of what we throw out (paper, glass, metal and other materials), is suitable for reuse. According to calculations, each family that throws paper in specially designed containers, for a year saves six trees from cutting down.

Unfortunately, most of the waste is still sent to landfills. The only solution to this problem is the sorting and recycling of waste. If people adhered to cleanliness, dumps would be 20% less.

USE OF WASTE. Despite the fact that for wild animals, waste actually poses a mortal danger, they are also a rich source of food.

At night, hungry foxes wander the streets of some cities in search of food. The richest places in the food are garbage containers near self-service restaurants. Here, the animals find chicken bones and sandwich remnants. To get to the food, they have learned to even open the lids of containers. In the world, rats and wild cats are often found in landfills. Silver gulls are another species that regularly visits landfills. Here, birds without food are finding food all year round, so the populations of gulls near dumps have increased.

WASTE THREATEN ANIMALS. The garbage left in the forests and parks not only spoils the landscape, but also causes serious damage to wild animals. The fishing line abandoned by inattentive fishermen acts like snares, into which waterfowl such as swans and coots fall. The line winds around their legs and wings or wraps around the neck.

The hook that sometimes swallows a bird sticks in her throat. Even where it is forbidden to use lead sinkers, a lot of lead is still found at the bottom of the rivers. If a bird, for example, a swan, swallows such a sink from curiosity, it will perish from poisoning. On the beach, birds can get entangled in plastic rings to transfer cans of drinks. These rings wrap around the bird’s beak and head so that it can no longer eat. If a leg or wing of a bird gets stuck in such a ring, it desperately tries to free itself. An exhausted victim, even if she can be freed, becomes an easy prey for predators. Glass fragments wound foxes, badgers and other animals. Glass bottles and jars are dangerous for small forest dwellers. Lizards, anguis and small mammals in search of a warm place often get inside these vessels, but not always the animal manages to go back the same way, and they die of hunger and thirst. Only in certain cases they can be saved.