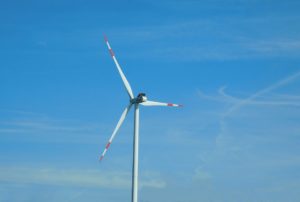 The power of the sun and wind: renewable energy sources for the first time outstripped nuclear energy in the US.

US nuclear power plants began to produce less energy than the station for the production of electricity from renewable sources, according to the energy agency EIA.
After the rapid development in 2016 and 2017, renewable energy sources have pushed the nuclear sector as one of the most important sources of energy in the United States. This happened despite the legislative support of the “peaceful atom” with the help of tax benefits and preferences – within the framework of development of “carbonless energy” and reduction of carbon dioxide emissions. Data at the beginning of May 2017 from the report of the EIA of the year show that while the dominant position in the US energy structure is taken by natural gas, then coal, and unexpectedly alternative sources of energy (sun, wind, water, land and biomass) unexpectedly came to third place. For the first time in the history of the United States, renewable sources pushed back the nuclear power – this was the case for two months in a row: in March 2017, their share was 21.6%, nuclear power 20.34%, in April 2017 – 22.98% renewable, 19.19% .

The volume of nuclear energy production decreased this year by almost 3% compared to the same period in 2016, while hydroelectric power generation increased by 9.5%, and use of other renewable energy sources increased by almost 14%, since all more states use cheap technology.

Google has become one of the largest consumers of energy extracted from renewable sources.

All the companies of Google have fully completed the transition to renewable energy sources. This is reported in the Twitter corporation.

The new deals allowed to increase the amount of renewable energy generated by the company up to 3 gigawatts, which covers Google’s total energy consumption in 2017.

November 30 on the website of the company Electrek reported that Google has signed contracts with three new wind stations in South Dakota, Iowa and Oklahoma. The total investment of the corporation in the sphere of clean energy reached $ 3.5 billion.

Google is the world’s largest corporate consumer of renewable energy.