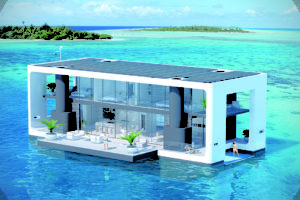 In the United States developed the concept of an autonomous houseboat

The American company Arkup introduced the concept of a two-level self-contained floating house.

Thanks to electric motors, powered by solar panels, hydraulic supports are able to stabilize the position of the house and lift it above the water.

“Floating houses are quite popular in some parts of the world, particularly in the Netherlands, the cities of the West Coast of the United States and Southeast Asia,” Arkup said in a press release.

Indeed, in Cambodia, houseboats are found quite often, but there it is a dwelling of the poor, and, probably, it is not entirely correct to compare their modest bamboo boat houses with the presented luxury villa yacht.

Nevertheless, the concept looks very attractive, especially if you have money for such a toy. An autonomous electric two-story houseboat can push hydraulic feet down to 6 meters in depth.

The house is actually self-sufficient, it even collects rainwater from the roof, and its solar batteries with a total capacity of 30 kilowatts charge lithium batteries, saving electricity. The house is also equipped with all kinds of communication, including 4G, satellite TV and Wi-Fi.

The maximum speed of the houseboat is 7 knots, and yes, according to the developers, it is able to withstand the hurricane 4 categories, so despite its seeming fragility, this house is almost safer than a villa on the beach.