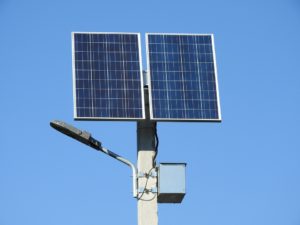 Sunlight not only makes life on Earth possible, it can eventually become a supplier of a large amount of electricity, without which modern civilization is inconceivable. The use of sunlight may not be direct, but in the form of energy supply to turbines.

In this case, the mirror set focuses the solar energy on the heat exchanger, which evaporates water or any other liquid, producing steam for driving a conventional turbine connected to the generator. However, direct conversion of sunlight into electricity is possible, for example, using silicon solar cells.

A typical solar cell consists of six layers. The base (base) simultaneously serves as the negative pole of the element; The reflective layer keeps light inside the working part of the element, increasing its electrical efficiency; two layers of enriched silicon (N-type and P-type) form the core of the solar cell. Silicon N-type has free negative charges, and silicon P-type – unbound positive charges. In the absence of illumination, these charges accumulate in the contact zone of the layers; When the sunlight falls on the element, the charges diverge. Such charge transfer creates a constant current if the solar cell is part of a closed circuit. From above silicon is protected by a transparent film on which the metallic contact of the positive pole is placed.

How the solar cell works

The sunlight incident on the solar cell element separates the positive and negative charges that accumulate in the contact zone between the P-type and N-type silicon wafers. This separation creates a voltage, under the action of which, when the element is inserted into a closed circuit, an electric current begins to flow in it.

Solar cells  produce a direct current, which can be converted to power stations in an alternating current. Excess electricity generated by solar cells can be stored in rechargeable batteries for later use.

For most space satellites, solar cells are the main source of energy. These batteries are different from those used on the Earth. If batteries installed near the earth’s surface need protection from rain and dust, then those that function in space must be protected from hard cosmic radiation.

Sunlight can provide heat to a steam turbine plant that drives the generator. A set of mirrors focuses sunlight on the tower-hub. The resulting light beam is so intense that it can convert sodium into vapor. Sodium vapor is used to convert water into steam, which then drives the turbine.