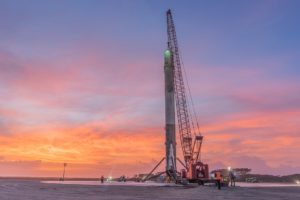 In Florida, from the cosmodrome at Cape Canaveral Launch Vehicle Falcon 9 with the Dragon ship loaded with the ISS. The broadcast of the launch led NASA. On Wednesday it is planned to dock the cargo ship with the International Space Station.

Orbit cargo ship carries about 5732 lb of cargo. These are necessities and supplies.
For the first stage of the carrier rocket this is the second launch. The separation occurred three minutes after the start. A confirmation of the successful separation of the cargo ship from the launch vehicle was confirmed after 11 minutes.

Since 2017, SpaceX has always used the first stage already in flight, but does not save it again. For this launch, the one that launched in August 2017 was used. And the Dragon capsule sent to the ISS already visited the orbital station in April 2016. This time, the preservation of the first stage was also not planned.

The first launch of this rocket took place back in 2010, since then it has become the main rocket of SpaceX corporation, with which commercial satellites are delivered to orbit, cargoes are delivered to the ISS and devices in the interests of US government and military structures. The company plans to launch up to 20 missiles this year.

Since the launch to date, there have been only two accidents with Falcon 9 missiles. The first one was in June 2015 when the cargo ship was launched to the ISS. The second – in September 2016, when the rocket exploded on the launch pad during pre-flight training.

Since 2016, the company engineers have developed and successfully used the method of soft landing or splitting of the first stages of this rocket, with which SpaceX intends to significantly reduce the cost of launches in the future.

In late March, SpaceX was unable to test one of the elements of the Falcon 9 booster. Elon Musk is sure that the rocket fairing hit the water surface at high speed because the parachute wing did not open properly.