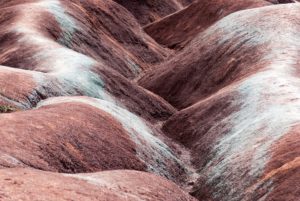 To clear the place for crops, American farmers in the north and planters in the south were cutting down the forest. With the disappearance of forests, the natural regulation of the runoff of precipitated precipitation has ceased. The water did not soak up gradually into the ground, and after every rain it stormed down its surface, eroding the soil, forming ruts and ravines.

In the steppe regions, the situation was no better. With the arrival of European colonists, virgin steppes began to swing open quickly. The soil was exploited, from year to year it was not allowed to rest. As a result, its granular structure was destroyed. When drying, a crust formed on its surface. Drops of fallen rain were not absorbed by the soil, the earth was usually solid, parched, and the water, quickly draining over the surface of the soil, blurred it. Streams of water, as it were, cut off the upper layers of the soil. Then the wind and water picked it up, carried away with them.

Erosion and depletion of soils are increasing as a result of the narrow specialization characteristic of American agriculture: farms and whole districts in one or a few cultures. In the south, such a monoculture is cotton, in the central part of the United States – corn. To the west of the corn belt are the regions of winter and spring wheat. Many farms also specialize in tobacco or some sort of vegetable.

The wide spread of tilled crops (corn, cotton, tobacco) leads to the fact that the row spacing loosens several times in the summer. This sprays the soil, weakening the connection between its particles. Repeated from year to year crops of tilled crops on the same sites destroy the structure of the soil, make it pulverized, and thereby cause a sharp increase in erosion. The predominance of annual crops and absence; Fertilizers leave the land every winter without any cover. Meanwhile, in much of the United States, snow falls only briefly, and the land does not freeze, thus remaining at the mercy of erosion in winter. Especially the wide sizes all this took in the Appalachians and in the mountain states.

The farmer does not spare her in the process of cultivating the land. He does not allow the field to rest for at least a year and does not adhere to any rational fruit-cropping system at all. The field, lying year under a black or green vapor, in his eyes is nothing like a certain amount of dollars, irrevocably flew out of his pocket.

With what rapidity the soil is now being destroyed in the United States, the following fact shows. American soil scientists have established by a number of experiments that on the fertile lands of the central American state of Missouri, when they are covered with a natural grass cover of the steppes, a layer of soil  thick would have been washed away by erosion not earlier than in a hundred thousand years.

But if it is possible to plow this fertile land and from year to year plant it with only one crop – maize, then in thirty, at most fifty years, it will almost cease to give birth.

In fact, it happened in the USA.

In 1935, the Ministry of Agriculture of the United States established the Soil Conservation Service, which carried out extensive work on the survey of the country’s land resources. Workers of this organization made scientifically based plans to prevent erosion for large areas of the country. However, only about one-third of the surveyed area managed to accomplish them. The fact is that not all farmers have the means necessary to carry out these activities. Soil erosion in the United States is so large that the US fields lose eight times as much nutrients every year as a result of erosion, which leaves them with the entire crop removed.

Of the lands affected by erosion, about 50 million hectares lost almost all of their soil layer or are so corroded by ravines that they can no longer be used for crops. Let’s say, for comparison, that this is much larger than, for example, the territory of Japan, and almost 10 times higher than the entire crop area of ​​Japan.

These spaces, which were recently famous for their fertility, have now turned into sterile “bad lands”. About 170 million hectares, that is, almost a fifth of the entire territory of the United States, has lost at least three-fourths of the upper, most rich soil humus, and is also rapidly approaching full infertility. Both these categories are mainly lands that were formerly used for sowing or pasture.

In addition, over 300 million hectares of land, that is, about two-fifths of the area of ​​the United States, lost a quarter to three quarters of the upper soil layer, and their fertility declined markedly.

Under crops in the United States now employs about 150 million hectares. The total area of ​​the US lands that lost at least a quarter of the upper soil layer as a result of erosion caused by improper farming is much larger than the total area of ​​Western Europe or India. At the same time, with every year, erosion grabs new spaces.

In the USA, one of the first places in terms of erosion and depletion of soils occupies the south. The southern states of the United States are the realm of cotton monoculture.

This is what happened, for example, with the so-called prairies of the state of Texas. Until recently, it was one of the main cotton growing districts of the United States. Once the earth here was a thick black color, and now it looks like a blanket of black, gray, brown, yellow and even white flaps. Erosion with horrendous speed cut here consistently the soil layers from the black fertile clay up to the white limestone – a comparatively unproductive subsoil. Such major changes have occurred during some forty years that have passed since this land began to be processed.

The main damage is caused by flat water erosion, which occurs almost unnoticeably. After each rain, some of the most fertile topsoil is carried away from the fields.