Fuel is the main expense of airlines. Aviation consumes an impressive 6% of world oil. Reducing greenhouse gas emissions is an important task for the transport sector. These circumstances push scientists and entrepreneurs to develop alternative methods of aeronautics.

The startup Wright Electric declares that it intends to provide the possibility of electromotive commercial flights from London to Paris in 10 years.

The company is a graduate of the famous American incubator of startups Y Combinator, through which companies such as AirBnB and Dropbox were held. The Wright Electric team includes specialists whose development in the field of electrical aeronautics was funded by NASA.

The projected electric plane will carry 150 passengers for a distance of up to 300 miles. That is actually considered as an alternative, for example, Boeing-737 at short distances. According to Wright Electric, about 30% of short-haul flights are carried out just over a distance of less than 300 miles – a large market. The goal of the startup: in 20 years all short flights should be carried out on electric planes.

The British budgetary airline Easyjet has expressed its interest in technology. “Easyjet has already negotiated with Wright Electric and actively provides our competencies as airlines for the development of this exciting technology,” the airline’s spokesman said.

At the same time, while all this is more like a loud statement.

The company relies on future innovations in energy storage technologies. If the rate of technological changes in this sector is insufficient, the firm will not be able to provide sufficient capacity for the claimed range of flight.

In general, how the aircraft will work is not completely clear yet. If there are enough powerful batteries, it can be completely electric, if not – then hybrid systems can be considered.

Wright Electric has serious competitors. For example, the aviation giant Airbus, which is developing its electric aircraft. The concern already has a working model of a two-seater E-Fan, in addition, Airbus announces plans to create its own short-haul electric aircraft to transport 70-90 passengers. 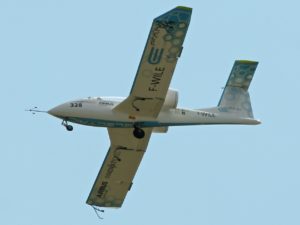 It is clear that the electric plane has a number of obvious advantages: it does not make much noise and does not require fuel.

Wright Electric is planning a number of additional technological innovations that will make electric planes more attractive for airlines and passengers. For example, on the surface is the idea to use removable battery packs, which will reduce the time of preparation of the aircraft for flight even compared to the traditional refueling of jet fuel.

Will it fly up or not? Aircraft construction is an extremely capital-intensive industry, in which a vast amount of accumulated knowledge is used. Therefore, the appearance of upstart here is unlikely. It is more likely that the development of a young company (and herself) can be acquired by someone from large aircraft manufacturers.

In any case, this movement is useful for the development of aircraft engineering technologies and for solving the problems of reducing the carbon footprint of the world aviation.