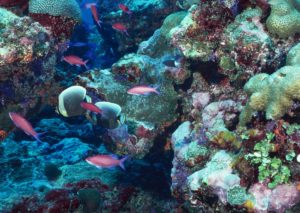 Coral reefs are fantastically beautiful and most “densely populated” ecosystems of the World Ocean. The biomass of bottom invertebrate animals and fish in them is estimated at hundreds of grams per square meter of the seabed. The total number of species on coral reefs can reach one million or even exceed this value.

Such a stormy life reef ecosystem is due to coral algae living in corals (symbiotic algae), whose photosynthetic activity does not cease throughout the year.

The coral slime washed off the reef serves as a substrate for the intensive development of bacterial plankton, which in turn forms a bacterial-organic suspension, serving as food for zooplankton and benthic invertebrates, and then for the food chain for fish. Thus, coral reefs increase the productivity of surrounding marine areas.

Calcium carbonate, intensively isolated by the madreporous corals, foraminifera, calcareous algae, is used to build the coral reef frame. Therefore, coral communities contribute significantly to maintaining the carbonate balance of sea water, seceding from it up to 2 billion tons of calcium carbonate per year.

Wave-resistant reef ridges protect the shores of tropical countries from the destructive effect of sea waves, preventing erosion of shores.

Local fisheries in the reef zone are an important source of nutrition for the population of coastal countries (for example, the countries of Oceania). For millennia it was conducted in such areas with sparing methods that do not destroy reefs. Hooks, traps, nets outside the reef zone were used. Even in the 80 years of the last century, reef fish resources were estimated at 9% of the world’s total marine fish stocks. Now these reserves are greatly undermined because of the intensification of fishing.

In recent years, the areas bordering the reefs are regarded as very promising for the cultivation of healthy algae, echinoderms, mollusks, crustaceans and fish.

Coral reefs are excellent “natural laboratories” for researching various aspects of metabolism in the reef community – they have found specific biological active compounds with excellent prospects for drug use. It should be noted that industrial production of these compounds is planned to be carried out not by reef hydrobionts, but by genetic engineering methods.

Finally, it is difficult to overestimate the role of coral reefs in the development of tourism – an important income item of coastal countries.
Global climate change is now accompanied by frequent extreme events. In particular, in 1997-1998 there was an abnormal increase in the surface water temperature of the tropical zone of the World Ocean, which led to the mass death of corals on the vast water areas of the Indian and Pacific Oceans. Then, in coastal areas of Bahrain, Maldives, Sri Lanka, Singapore and near Tanzania, up to 95% of all corals in shallow reef areas were killed. In other coastal zones of the tropical belt, from 20 to 70% of corals were subjected to the same fate. In the early 2000s, the tragedy was repeated twice, especially affecting the central and southern parts of the Pacific Ocean, and by the middle of the zero years, according to scientists, only a little less than half of the previously existing reefs remained on Earth.

But not in all reef areas, the situation is so catastrophic. For example, the coral cover in the Maldives has been completely restored due to the rapid growth of acroporids (corals-acropores), whose growth reaches 20-25 cm per year. The fact is that the Maldivian reefs represent fairly balanced ecosystems, the negative impact of man on which is not yet very large. A different picture is observed in the region of Bahrain and Sri Lanka, where the reefs were under very strong anthropogenic pressure, were significantly destabilized and rapidly degraded after exposure to abnormally high temperatures.

Thus, not sharp climatic fluctuations, and a high level of anthropogenic press leads to fatal consequences for this ecosystem. The increasing negative impact of humans is especially noticeable in reefs located in areas with high population density, primarily in the Indo-Australian archipelago, where more than 30% of the coral reefs of the entire oceans are concentrated. It is for this reason that, under the worst scenario, by 2030 the existence of the Great Barrier Reef located in the region may be at stake.

Discharges of industrial production and sewage in populated areas, the entry of petroleum products into the water during offshore oil production, the appearance of fertilizers in the water due to intensive agricultural activities are all elements of the most severe anthropogenic pressure on coral ecosystems.

The widespread deforestation in the tropical zone has led to massive erosion of soils during the rains, which reduces the clarity of sea water. Increasing the turbidity of water, along with fertilizers, does not give the corals a chance to survive in a competitive struggle against the rapidly multiplying harmful algae that colonize the surface of the corals. So the growth of corals is suppressed, and they degrade.

Intensive catch of fish led to the fact that their numbers decreased tenfold relative to the normal values ​​for the reef values. From 40 to 70% of all fish (biomass) on the reef are herbivorous. A sharp decrease in their density provokes active growth of algae, which destabilizes the reef ecosystem. As a result, the corals degrade and die, and the entire process can occur within one year.

Of particular concern was the practice of past, and now banned, fishing with explosives, in which the coral covering of the reef was destroyed.

Due to a decrease in the stocks of traditional commercial fish species, an ever-growing population in the reef areas began to use new groups of reef fish: fish-surgeons, angelfish, gubans, parrotfishes …

The industrial cultivation of large grupers and gubans (for example, Napoleon fish), which has entered into practice, has not reduced the volume of their fishing on reefs, since fish caught in the wild are several times more expensive than maricultural fish. And her catching, and delivery in live form to restaurants in Asian countries is a very profitable business.

In recent decades, the situation is complicated by the uncontrolled fishing of reef fish for aquarium trade. The order for catching aquarium fish is formed by the companies of developed countries. It is they who promote marine aquarism among amateurs and constantly expand the markets for wild reef fish. The emergence of a ramified network of local firms involves the coastal population in “aquarium fishing”. Trade in marine hydrobionts is a super-profitable business. Often local fishermen receive less than 1% of the final cost of the catch, the rest goes to the merchants.

To catch large volumes of fish, the means of rapid immobilization began to be used, including sodium cyanide. Now the use of this poison is prohibited, but the damage done to reefs over the decades is enormous. However, the immobilization of fish during their catch is not a thing of the past – cyanide was replaced with poison of reversible action, overdose of which also leads to the death of fish. Another barbaric way of fishing is the “muro-ami” method, in which fish are driven into the net by poles and stones, destroying corals.

It should be noted that of more than 4,000 species of reef fish, under artificial conditions, less than 100 are bred, which is explained by the complexity of their larval development. Therefore, the absolute majority of fish for marine aquariums are caught in nature. The same applies to invertebrates. For example, the share of divorced Madrepora corals in aquarium trade does not reach 1%.

The scale of the detrimental impact of food and aquarium fishing for fish and invertebrates on reefs is clearly visible from the data of the Global Coral Reef Monitoring Network, given for the late twentieth century. According to these data, in countries that banned the export of reef dwellers, a good state of reef ecosystems prevailed, while in the countries that exported reef hydrobionts, it was mostly “poor” and “tolerable”. This once again confirms that the person plays the decisive role in the unfolding tragedy of a planetary scale.