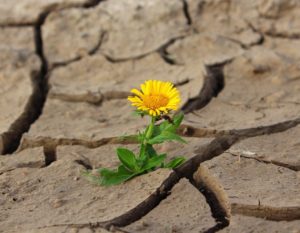 Ecosystems that do not undergo a full recovery cycle will in the future begin to deteriorate due to prolonged and frequent droughts. To such conclusions came a group of American scientists, whose research results, with reference to Nature, were reported by the publication Phys.org.

Scientists have studied satellite data on the periods of photosynthesis of plants – this is how one can judge the time of restoration of ecosystems after a drought. The measurements were carried out using the “precipitation-evaporation” index. The indicator takes into account the temperature, soil moisture, recent rainfall and the need for plants in the water.

“It was widely believed that after a drought, all ecosystems recovered immediately as the weather changes and the rains begin,” said study participant, senior lecturer at the University of Utah William Andereg.
It turned out that the end of the drought and rainy weather did not immediately help nature return to its normal state. In some regions of the world, plants do not have time to recover.
“Plants can be irreversibly damaged due to stress during drought, some of their water balance system may be damaged, and its recovery takes years,” says Andereg.

Climate forecasts are disappointing: in the future, the duration of dry periods will grow. Then, most likely, ecosystems will not have time to recover to a new drought and will experience what scientists called a “double blow” – when a repeated drought strikes a blow to the ecosystem that has not yet recovered.
This happened in the forests of the Amazon in 2005 and 2010. Satellites have shown that in five years the ecosystem has not had time to recover to a new drought.

According to Anderega, the weather in a particular region of the world is responsible for the restoration of the ecosystem. Most of the regions require half a year to a year to recover. On the example of California scientists show that the rains that came to the region after the drought helped the ecosystem to recover. However, according to the researcher, in the state there were places where the drought caused irreversible damage.

Fears are caused by the situation in the high Arctic latitudes, the tropics of South America and South-East Asia. There the period of ecosystem restoration takes two years.

“This is worrying because the regions have the largest carbon stocks,” says Andereg.

The destruction of forest ecosystems will not allow nature to cope with the carbon dioxide released. This, in turn, will affect the climate, provoke new droughts and exacerbate the state of ecosystems.

Fears of environmentalists are justified, especially in the context of weather anomalies that humanity has encountered in recent years. The temperature contrast between the poles and the equator decreases due to warming in the Arctic. The weather changes dramatically, regional atmospheric processes increase, so the regions experience local natural disasters.
Forecasters have long predicted that the inhabitants of the Earth will face extreme weather conditions. In 2016 the global temperature broke the record. According to the director of the World Climate Research Program David Carlson, these changes of a planetary scale can not be explained by meteorologists.

However, one of the important factors remains human activity. Due to anthropogenic impact, forests suffer from climate change. In this case, the trees, by processing carbon dioxide, can level the human impact on the climate. The integrity of forests protects the planet’s climate from destruction, and stands for the preservation of large untouched forests.