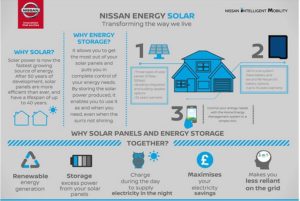 Nissan decided to follow the example of Tesla and enter the solar energy market. The manufacturer of the most popular electric vehicle in Europe is going to independently master the market of domestic solar batteries and battery plants. Solar roofs Nissan has already gone on sale in the UK.

Initially, Nissan was going to do it in partnership with E.On and Ovo Energy, but later the Japanese decided to start a new business on their own. Currently, Nissan offers a package installation of 6 solar batteries for $ 5,200, the same with a 4 kW battery pack will cost $ 10,300. This is slightly cheaper than similar Tesla offers. At the same time, Nissan hopes for the loyalty of its customers who bought Nissan Leaf cars. In addition to reducing the price of the “home kit” can install not new batteries, but those that have already been used in cars, but are good enough for a home energy storage.
In addition to “household batteries,” Nissan, again after Tesla, plans to develop a network of its own charging stations, thus creating a closed propietary ecosystem.
Recall that the installation of sets of solar panels and batteries is gaining increasing popularity in Europe, even in places where there are not so many suns. For example in the north of the UK, where the number of sunny days is relatively small, but in winter the light day lasts up to 16 hours, solar installations save up to 75% of electricity. And modern solar panels produce a noticeable amount of energy, even in cloudy weather.

Recall, California may be the first state in the US, where owners of new homes will be required to install solar panels at the construction stage. The popularity of green energy has led to a significant reduction in the cost of electricity production through renewable sources. Therefore, the transition to renewable energy will occur faster than planned by the state authorities. Half of electricity California will receive from “clean” sources by 2020.