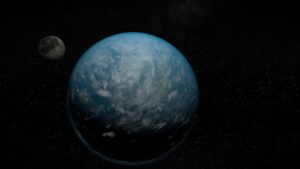 What is ozone? This is a special form of molecular oxygen (O3). It is mainly concentrated in the stratosphere at an altitude of 15 mi (the upper limit is 27-31 mi). It is interesting that ozone molecules in the troposphere are a serious danger, because they are capable of destroying living tissue, including lungs. Breathing ozone is extremely dangerous! However, in this layer of the atmosphere there is very little ozone, it is formed only during lightning discharges. The formation of ozone in the stratosphere is due to the reaction of the splitting of molecular oxygen by the short-wavelength (wavelength 242 nm) ultraviolet radiation of the Sun. As a result, free oxygen atoms form an ozone molecule.
Despite the fact that the percentage of ozone in the atmosphere is very low, less than 0.0001%, this gas is an important component of great ecological and biological importance. The fact is that ozone has a unique ability to actively absorb ultraviolet (UV) radiation. In the atmosphere, ozone is concentrated in the upper layers of the stratosphere, forming a special layer, which is called the ozone screen. What are the sizes of the ozone layer? If we compress all ozone to such an extent that it resembles water in density, then on the Earth’s surface it would form a film with a thickness of 2 to 4 mm. The minimum thickness of the film would be observed near the equator, and the maximum would be somewhere near the poles. The inhomogeneity of ozone distribution is also observed in height. The maximum concentration is at 15 mi. In addition, the density of the layer increases again at an altitude of 43 mi. Most of the ozone is in the stratosphere, but in the Arctic the lower boundary of the layer is very low, and in the tropical zone – high. As for the troposphere, the ozone content is lower here; In addition, its quantity is subject to both seasonal and other changes, in particular caused by pollution.

Did you know that … The main releases of freons occur in the Northern Hemisphere, and the most intensive depletion of the ozone layer is observed over the Antarctic. Why? It turns out that Freons move well in the layers of the troposphere and stratosphere, and the period of their “life” is calculated for years. The wind carries freons throughout the atmosphere, including the Antarctic.

For the first time, information on the reduction of ozone in the atmosphere was obtained back in 1985. Atmospheric research specialists from the British Antarctic Survey found that ozone in the atmosphere above the Halley Bay station in Antarctica decreased by 40% between 1977 and 1984. Later it was confirmed by other researchers who showed that the region of low ozone concentration extends beyond Antarctica and covers a layer from 15 mi, which is a significant part of the lower part of the stratosphere. This phenomenon was called the “ozone hole”. Also, in the early 1980s, the Nimbus-7 meteorological satellite discovered a similar hole in the Arctic; although much smaller in area. The decrease in the ozone content in it was not very large, only 9%. However, in the subsequent period from 1979 to 1990, The ozone content over the Arctic decreased by another 5%.
Such a significant loss of ozone poses a serious danger to humanity. Reducing the concentration of ozone by 1% can lead to an increase in the intensity of hard ultraviolet radiation on the Earth’s surface by an average of 2%. On living organisms, ultraviolet acts as ionizing radiation. But unlike the latter, it is not able to penetrate deeply into the tissues and affects only superficial organs. However, ultraviolet energy is sufficient to destroy DNA and other organic molecules. Ultraviolet rays can lead to skin cancer, such as fast-flowing malignant melanoma. They are able to cause cataracts and immune deficiency, not to mention burns of the skin and cornea of ​​the eyes. Ultraviolet is dangerous for both animals and plants. Particularly affected by it are marine ecosystems, because this radiation is poorly absorbed by water.

Assumptions about the threat of destruction of the ozone layer were voiced back in the late 1960s. Environmentalists were alarmed by the danger posed by water vapor and nitrogen oxides (NOx), remaining as a result of jet engine emissions of supersonic aircraft and missiles at an altitude of 15 mi. It is at this altitude that the protective layer of ozone is located, which prevents the penetration of hard ultraviolet radiation onto the surface of the Earth.
In 1974, researchers came to the conclusion that the special substances – chlorofluorocarbons (CFCs) can also cause destruction of the ozone layer. These compounds include freons – which are chemically inert on the surface of the Earth. Freons have been used for more than 60 years as refrigerants in refrigerators and air conditioners, they are used as propellants for aerosol mixtures (in household aerosol cans), as well as as foaming agents in fire extinguishers. They are also used as cleaners for electronic devices, for dry cleaning clothes, for the production of foam plastic. Freon, which is released into the atmosphere, rises to the upper layers and is destroyed there under the influence of ultraviolet rays. The substance decomposes into separate components that have a high reactivity. ‘Atomic chlorine is especially dangerous.’ As a result of the photochemical decomposition of freon in the stratosphere, the chlorine ion contributes to the destruction of ozone. Thus, using chlorofluorocarbons, chlorine from the Earth’s surface through the troposphere and the lower atmosphere is transported to the stratosphere. Once in the upper atmosphere, less inert chlorine compounds are destroyed in the layer where the main quantity of ozone is located. Remnants of Freon molecules have a harmful effect on the layer of atmospheric ozone. To date, CFCs have already destroyed between 3 and 5% of the ozone layer of the atmosphere. Especially dangerous is the fact that the chlorine that enters the ozone layer acts as a catalyst for the process of ozone depletion, while the amount of chlorine does not decrease. By calculation, one chlorine atom can destroy up to 100,000 ozone molecules before it deactivates or returns to the troposphere. Millions of tons of CFCs are being emitted into the atmosphere, but even in the event of a complete cessation of production and use of these substances, one should not expect an immediate cessation of the destruction of the ozone layer. The destructive process will continue for several decades.

Reducing the density of the ozone shield of the planet entails a decrease in crop yields and livestock productivity. There will be a sharp decline in fish catch. Physicians will note the increase in the incidence of people with skin cancer.
What will happen if the concentration of the ozone layer falls by 50%? The amount of UV radiation that falls on the surface of the Earth, in this case, will increase by a factor of 10, which will have a disastrous effect on all living organisms. The complete destruction of the ozone layer will lead to outbreaks of skin cancers, destruction of plankton, as well as mutations of plants and animals. In order to prevent the further destruction of the ozone screen, a number of measures were taken by the international community to reduce the intensity of this destructive process. In 1977, the UN Environment Program adopted a plan of action to stop the destruction of the ozone layer. In 1985, a conference was held in Vienna, which approved the Convention on the Protection of the Ozone Layer. As a result, a list of substances that adversely affected it was compiled. It was decided to inform all countries about where these substances are manufactured and used.
The decisive event occurred in 1987, when the Montreal Protocol was signed, which established the need for control over the production and use of freons. Most countries have signed this document. In accordance with it, by 2010 the production of freons had to be discontinued, but the main provisions of the protocol are not being fulfilled even now. However, the question remains: is it growing only due to anthropogenic factors, or are there any other reasons? In any case, today the probability of destruction of the Earth’s shield is still one of the main dangers threatening humanity in the near future.