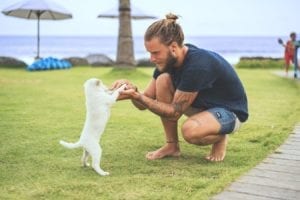 What you need to know if the dog tore a nail: what to do and how to help your pet.

Many owners of dogs sooner or later face such a problem as a cracked or torn nail. This is very serious, because for a pet it is a strong pain and discomfort. In addition, the wound can bleed.

If a person encounters a similar incident for the first time, it can panic and provide improper assistance, this can lead to infection or improper growth of nails.

Therefore, it is recommended to familiarize yourself with the rules of first aid in advance, as well as to get a veterinary first aid kit if you do not already have it.

Why is this happening?

The dog may nail to cling to the carpet, upholstery or the projecting roots of plants. It can also unsuccessfully jump, and the nail will twist and break from the blow. Damage is even easier if the dog is already aged. In this case, the nails become dry, brittle and fragile. The chance of getting injured is even higher if the animal has long nails. Such often cling and injured.

The dog’s nail is surrounded by large blood vessels, if broken, they can be touched by a fragment of the nail plate, hence the severe pain and heavy bleeding. The nails are attached to the bone, so there is a greater likelihood of infection in the wound, as well as the occurrence of inflammation.

Below is a video with an example of the consequences of a broken nail untreated on time:

There is nothing more you can do on your own, so after giving first aid, take the dog to the vet!

ATTENTION: do not neglect the visit to the veterinarian, this can result in serious consequences – from infection to amputation of the phalanx on which the nail cracked!

If nail has broken half or fell off a piece

If nail has completely broken off

For any of these injuries after first aid, it is necessary to apply an antibiotic ointment or powder to the root of the nail and bandage it with a bandage. These dressings change about three times a day during the week – two.

If the dog has torn off the bandage and is constantly trying to lick the wound, then there are two options. The first is to put a special cone on the pet, which does not allow the tongue to reach the wound. The second is to fasten a bandage around the neck, and put a tight sock on your paw, tied up with an elastic bandage.

ATTENTION! When you provide first aid to a dog that has damaged its nails, it is unlikely that it will sit still. Usually the pet escapes, runs away, sometimes even tries to bite the owner. No matter how good the dog is, its behavior at the time of severe pain can be unpredictable.

Be prepared for such a course of events, with any procedure, especially causing discomfort and pain, keep your pet in a tight embrace. So the dog can not escape and, most importantly, the dog feels safe.

How to avoid problems?

Caring for them should be a mandatory procedure. Cut the nails regularly, this will reduce the risk of a fracture or fracture. To do this, pick up in the pet store suitable for your dog nails.

The structure of the dog’s nail is much more complicated than that of many other animals, and even more so than the structure of the nail in humans. If you do not go into details, you can divide it into a nail bed or, in other words, pulp (inner layer) and a keratin case, which is located outside.

When undercutting it is very important not to hurt the pulp, but to trim the outer layer, while parallel to the floor, so that the dog is comfortable walking.

If your pet has no nails in color, then it will be easy for you to determine the boundary of the layers, which means to make a high-quality undercut. You can see the pulp, putting the dog on his back and looking at the paw on the inside.