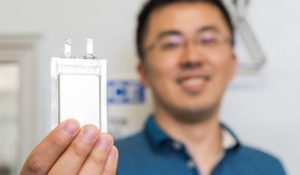 Thanks to the increased capacity, the battery anode consists of a very thin sheet of lithium foil that is lighter than graphene, carbon or silicon – the battery can be made twice smaller in size or, while maintaining its size, doubling the range of the dron flight on one charge. According to founder SolidEnergy Hu Qichao, the quadrocopter coverage area will increase 4 times.

As an electrolyte, semi-solid instead of flammable liquid, which is commonly used in lithium-ion batteries, is used. Thus, two technical innovations – a thin anode and a unique electrolyte – allow us to get a battery with an energy density of 450 kW and 1200 W * h per liter.

The startup already sells lithium metal batteries to dron manufacturers and companies engaged in wireless Internet in rural areas. The price of them is much higher than that of lithium ion, in many respects because of small volumes of production. Recently, he managed to raise $ 34 million in funding that SolidEnergy will spend on expanding production, and then, according to Hu, the cost of lithium metal batteries is comparable to that of lithium ion. In total, the company received $ 50 million in investment – not so much to launch a product in batch production.

Drones are just the first step. Subsequently, SolidEnergy hopes to launch new types of batteries for wearable devices (in 2019) and for electric vehicles (in 2020 or 2021), reports Green TechMedia.

A new method for the creation of lithium-metal batteries was developed by the chemists of Canada. Their technology will increase the average power reserve of an electric vehicle on one charge from 125 to 373 miles, and will make the batteries cheaper and more secure.