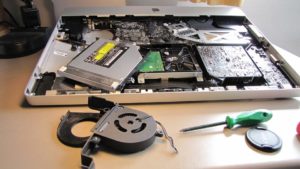 The word “throttling” of most people probably says little or nothing. Meanwhile, most of us probably met him in practice, even without knowing it. Today we will briefly explain what this throttling is, what it reveals and how to protect it. And more clearly? How to protect your laptop and desktop from excessive component overheating.

Throttling – what is it?
Simply put, throttling is a special security device designed to protect your computer from overheating that could damage your processor or graphics card. These two components emit a lot of heat during operation, which often can not be dealt with by the cooling system. In this case, the protection is activated, which reduces the chip emitting too much heat, thanks to which the temperature of the sub-assembly drops. However, the decrease in the rate is associated with a decrease in the processor’s performance, which results in a slowdown in the computer’s work or even the suspension of the device. Throttling is not dangerous for our laptop, but it is certainly undesirable. The more so because it is associated with a reduction in the life span of the sub assemblies submitted to it.

The most common symptoms of overheating the laptop
So if we notice that our laptop has slowed down oddly and is working with considerable difficulty, and maybe even somehow hangs up more often, we can assume that there are processes connected with throttling in it. It should give us a lot to think about the conditions in which we use a computer. The failure of a cooling system does not have to be our fault, of course, and may be associated with too weak cooling components mounted in the device. This tendency is unfortunately becoming more and more common in times when the holy triumphs focus on the smallest size and weight of laptops. This approach necessarily results in limiting the cooling systems, which are therefore unable to “keep up” with the requirements of increasingly powerful processors and graphics cards.

In many cases, however, the need for throttling is the result of improper use of the laptop. I am talking about keeping the device on your lap or on bedding when you are in bed. We will block the ventilation openings preventing the cooling system from working properly. Holding the device on your knees, we also provide him with the heat that our body emits (and it must be remembered that this way of using the computer is harmful to our health, which should probably be an argument in itself to change this habit).

The laptop, like any other device, needs regular cleaning for efficient work. Meanwhile, only a small part of users perform this task, as if forgetting that it can significantly extend the life of the computer. Such cleaning can be done by yourself using even compressed air, you can also give your laptop to a service where it will be done professionally and much more accurately than we would be able to do it ourselves.

In summary, throttling is not a dangerous phenomenon, but much better if it does not have to appear in our computer. Adherence to a few of the above tips on how to use the equipment will allow a significant reduction in the risk of its occurrence, and thus will protect us from the decline of laptop performance and speed, or even its suspension (usually at the least appropriate time).