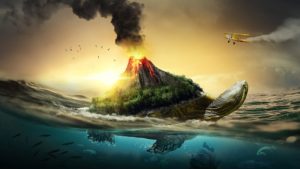 According to the analysis of scientists from WWF and the London Zoological Society, the number of wild animals on Earth has been halved over the past 40 years! Species on land, in rivers and seas are dying out, by destroying habitats, killing animals for sustenance or for other purposes.

We are not very interested in what happens to nature. We do not discuss ecology problems in popular programs. And even less do to solve these problems.

If half the animals died in the zoo, next week it would appear in the news on the front page. But it happens in nature. This damage is not inevitable, but is a consequence of our way of life.

Thanks to nature we have food, clean water and air, necessary for our well-being.

The rate of decline in numbers of animals, fish and birds was calculated by analyzing 10,000 different populations containing 3,000 species. These data were used to calculate the index of the “Living Planet Index” (LPI), reflecting the state of all 45,000 known vertebrate animals.

LPI is a clear and reliable indicator adopted by the UN Convention on Biological Diversity as a key indicator of biodiversity.

The second indicator used by scientists is the “ecological footprint” of humanity, i.e. measure of human impact on the environment. About what it is I wrote in more detail in this article. People destroy forests faster than they are able to recover, fish are caught faster than the oceans can replenish it, fresh water is pumped out faster than rainfall can compensate for its loss. Now more carbon dioxide is released than absorbed by oceans and forests.

According to scientists, for the average world consumption rate for 2014 requires 1.5 planet Earth, and for the rate of consumption of the US requires 4 Earth.

The fastest rate of decline in animal populations is found in freshwater ecosystems. Since 1970, the number of populations has declined by 75%. “Rivers are the bottom of the system,” said Dave Tickner, WWF’s chief adviser on freshwater resources. “Whatever happens on land, everything ends in rivers.” For example, he said, tens of billions of tons of wastewater are discharged into the Ganges River in India every year.

In addition to pollution, freshwater systems are destroyed by dams and increased water absorption. In the world there are more than 45,000 large dams of 15 m or more. Rivers in this case are divided into many small pieces, which prevents a natural healthy flow of water. In the last century, the number of people increased fourfold, and water consumption increased seven-fold.

Since 1970, the number of animals living on Earth has decreased by 40%. In Central Africa, the level of poaching of forest elephants exceeds the birth rate. Due to habitat destruction, the populations of gibbon hoods in Bangladesh and European snakes such as meadow are shrinking. And there are many such examples. However, there remains a weak hope that some nature conservation actions can help save some species, as happened with tigers in Nepal.

The number of marine animals also decreased in general by 40%, in particular, sea turtles suffered significantly. Hunting, the destruction of nesting grounds and death in fishing nets resulted in the number of turtles decreasing by 80%. Some species of birds were also severely affected. Because of the intensification of agriculture, the number of gray partridges in the United Kingdom has decreased by 50% since 1970, the red-head in Australia lost 80% of the population in 20 years before 2005.

The largest decline in animal numbers was traced in developing low-income countries, while the situation in the rich countries improved somewhat. But the destruction of wildlife in rich countries has already occurred long before 1970 – the last wolf in Britain was shot in 1680.

So, it does not matter whether you are interested in the survival of animals, it’s a pity they are talking about the environment of a person, and this applies to everyone. We need to take action to maintain nature and its habitat, so that we do not suffer the fate of the dying animals. And measures must be taken quickly. The rate of change in the environment is increasing.