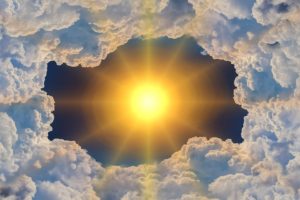 Chlorofluorocarbon (consisting of chlorine, fluorine and carbon) was invented in 1928 and used in refrigeration units. This was a major technological discovery, because there were major problems with the creation of refrigeration units that would be reliable in terms of security: not burned, not exploded, and so on. To solve this problem was invented a substance that does not exist in nature. One of the main advantages of this substance was its absolute chemical inertia, that is, it did not interact with any other known substances. This is important because the main problem of the rest of the substances used in refrigeration units was that they were chemically active. As soon as this substance appeared, it was called “freon”. It has been produced in many countries around the world, completely replacing all previous designs of refrigeration units and triumphantly, you can say, going around the world.

In 1973, 40 years later, a well-known British scientist James Lovelock decided to invent a device that would allow remotely measure chlorofluorocarbons, or Freon, in the atmosphere. He created this device to record the anthropogenic trail of entire states. As a testing ground for a device, he chose Britain. Lovelock moved on a ship off the coast of Britain and tried to find it followed by chlorofluorocarbons. But soon he realized his mistake, because the substance was everywhere in the same quantities. He listed the content of chlorofluorocarbon in the atmosphere and compared it with the values ​​of carbon monoxide emissions that occurred since 1930, when the substance began to be used in the refrigeration industry, and the figures came up. The scientist realized that everything that we threw was left in the atmosphere.

In 1974, Lovelock read a public lecture in Vienna, and the American geochemist Frank Cherwood Rowland came to this lecture. As a geochemist, he could not believe that some substance could be so inert – somewhere it should be destroyed. Upon returning home, a post-graduate student, Mario Molina, appeared. To take something as a graduate student, Rowland instructed him to conduct laboratory experiments. After several variants of the experiment, Molin thought that it was necessary to reproduce the conditions of the stratosphere, that is, he pumped ozone, oxygen, that is located in the stratosphere, and missed the rigid radiation. The result is an interesting pattern: radiation destroys chlorofluorocarbon, releasing chlorine, which destroys ozone. And this is a looped reaction, and one chlorine atom can destroy 105 ozone molecules. Genius and Rowland, and Molina were in that (they received the Nobel Prize in 1995) that they assumed that it was happening in the stratosphere. Comparing the amount of anthropogenic chlorine (which could be measured by the Lovelock instrument) in the stratosphere and the concentration of ozone, they obtained the same difference in 105. It turned out that the reaction that was observed in the laboratory could well lead to the destruction of the ozone layer.

In 1979, NASA launched a satellite that confirmed the destruction of the ozone layer, but completely not on the scale that Rowland and Molina assumed. The model developed by them provided 40% depletion of the ozone layer. It turned out that it is decreasing, but only by 2-6%. In this regard, the story “increased”, and the world stopped taking care of this problem until the detection of the ozone hole.

In 1985, an article was published by British scientists who, at their station in Antarctica, discovered the existence of an ozone hole. More precisely, it does not exist constantly, this phenomenon is seasonal: when the sun goes, spring in the southern hemisphere, in the end of September for two weeks there is a hole where the ozone layer is depleted by 40%. It is interesting that in general the ozone hole was fixed already since 1975. That is, all the stations that were there and some NASA satellites actually fixed it, but rejected those values ​​as abnormal as an error.

In 1987, a unique geo-ecological experiment was conducted. Two planes capable of climbing into the stratosphere flew from the southern tip of Chile. The experiment involved 150 scientists, but they, of course, did not fly, and there was ground service. As a result of this experimental flight, it was finally established that the destruction of ozone is due precisely to chlorine. When approaching the hole, the chlorine content was low, that is, it was in a bound state and ozone was high. In the hole it turned out that the chlorine content is sharply increasing, that is, chlorine oxide is in its free state, and the amount of ozone is sharply reduced. This was a direct proof, more such experiments were not carried out as unnecessary. From that moment on, active ecological policy in this area begins, and since 2000, the production of chlorofluorocarbon in the whole world has ceased almost completely.

Now we already have evidence that since 2003 there has been a decrease in the content of chlorofluorocarbon in the stratosphere, and, accordingly, we can talk about the restoration of the ozone layer. It is worth saying that good models have been developed and they show that by 2060 the ozone hole will close.