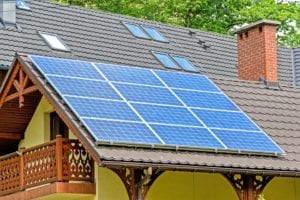 Solar batteries, also known as photovoltaic panels, are gaining more and more users around the world. Also in our country there are many willing to use additional, free energy. They are used on various scales, to generate a part of the energy necessary in the household, to obtain energy on a recreational plot, as a source of power for telephones and small electrical appliances, to illuminate advertisements and in many other situations. Is it worth being interested in such an ecological and free source of energy? Let’s think together.

The principle of the panels
Scientists are convinced that so much solar energy reaches our planet, that if it would accumulate its amount from one hour, it would be enough for the needs of the whole Earth for a year.

In the meantime, it is literally squandered. Therefore, all reasonable steps should be taken for its use. The technical possibilities are much bigger today than in the recent past. So let’s see how it catches, accumulates and processes solar radiation.

Photovoltaic panels are a kind of semiconductor connector. If the sun’s rays fall into the joint area, they generate electron-hole pairs. The connector area has a built-in electric field, thanks to which the electron-hole pairs are separated and one of the carrier types goes into the upper area of the connector and the other into its lower part. Then it is enough to flow the collected loads in order to obtain electric current feeding different receivers or accumulating in batteries.
Photovoltaic cells are most often grouped and depending on their number and size, the electric current gets different strength and voltage.

Types of photovoltaic systems
Everyone who invests in the purchase and installation of solar batteries, count on the fact that this money will be returned quite quickly, and their own collectors will significantly reduce the fees for the energy collected from the general network. In order for it to actually be necessary, it will be necessary to properly take care of the installed devices. Therefore, it is recommended that at least once a year a thorough inspection of the entire installation, i.e. a collector status check, checking the proper flow, and adjusting the automation.

The two basic configurations of solar system systems include:

– free-standing (off-grid) – are made of a solar battery, a battery and a device that controls the battery’s charge.

– connected to the grid (grid connected) – these are smaller or larger power plants, in which there is a large number of solar batteries that transfer their energy directly to the general power grid. A common solution here is to supply buildings connected to the network in such a way that the energy from the general system is consumed only when the demand for it exceeds the production of solar batteries. Batteries are not needed in these systems because the general network accepts any amount of energy produced.

Once we are determined for this type of investment, it is first necessary to analyze real possibilities and the best way to accomplish the task. It is good to advise professionals who will make the most precise measurements regarding our energy demand and indicate what type of panels and system will be optimal.

– in what kind of energy is used (permanent or temporary),
– what is the maximum download power,
– what is the average power demand,
– current financial possibilities,
– whether it is planned to be expanded.

After the analysis, the specialists will propose the best variant according to them. Then there is nothing else but its implementation and satisfaction from acquiring free, renewable, ecological and own energy. Good luck!