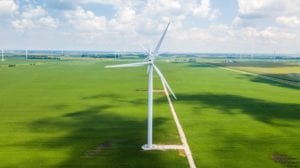 Over the past five years, there has been a sharp jump in the development of the alternative energy industry. World powers have invested in it about 1 trillion. $ and are not going to stop there.

Today, green energy provides about 10 million jobs, and this figure is constantly growing.

In 2017, the 8th Assembly of the International Renewable Energy Agency was held in Abu Dhabi. Representatives of IRENA made presentations on economics. According to their data, today the price of energy generated by renewable sources is falling so fast that in the very near future, green energy will become a cheaper source of electricity than traditional oil and gas.

For the period 2010-2017 The cost of electricity generated by solar panels on an industrial scale has decreased by 73%. From the Renewable Power Generation Costs Economics Economics Report, it follows that in 2017 the price of a kilowatt-hour of “green” energy is only 10 cents. Agency specialists make optimistic forecasts about the reduction of this figure almost twice by 2020, which will make alternative energy quite competitive with respect to fossil sources.

In a number of countries, today, unprecedentedly low prices per kilowatt-hour, obtained from renewable energy sources, are recorded at auctions. So in Mexico, Saudi Arabia, Chile, Abu Dhabi, Peru, Dubai, the price of 3 cents for one kilowatt hour of “green” energy is no surprise to anyone.

Wind power also shows a significant reduction in the cost of production. For the same period 2010-2017 it decreased by 23%. The most successful continental wind energy projects today are being implemented at a price of 4 cents per kWh, and the weighted average global cost (LCOE) is at 6 cents. Whereas the cost of energy production from fossil sources in a number of world countries is about 5-17 cents per kWh. The price depends on the country and the type of fuel that is used. IRENA says directly that by 2020 alternative energy will become the only strong competitor to traditional energy. And here, scientists are talking not only about solar and wind energy, but also about new types of “green” energy, which were actively introduced in 2017. These are projects in bio energy and geothermal energy, which show a cost of 7 cents per kWh at this stage of its development. They can also compete with fossil sources in a number of cases.

Adnan Amin, Director General of the International Renewable Energy Agency, said that by 2020, the cost of producing energy from renewable energy sources would be comparable to the prices of traditional energy sources. And in some cases, most projects of photovoltaic solar and wind generation will be able to generate the cheapest electricity on our planet. The head of IRENA notes that at present, alternative energy is experiencing a real flourishing and is capable of disrupting the usual international energy system, thanks to an unprecedented reduction in costs in generation technology.

Naturally, such a low cost of “green“ energy will become a problem for many countries-importers of oil and gas. President Donald Trump relies on greater oil production and is actively developing the coal industry. For these purposes, he took a number of measures, the relevant laws have already been issued.

However, renewable energy sources are developing so rapidly that both the governments of the world powers and the largest oil corporations will probably also have to turn towards green energy and start investing substantial funds in it to create more powerful power plants. If this happens, the demand for oil, coal and natural gas will gradually decrease, and the green tariff will be actively and quickly bought up.

The International Renewable Energy Agency has provided data according to which, since 2013, alternative energy has received about 1 trillion. investment. Currently 10 million people work here. Against this background, significant achievements of China in the field of renewable energy have also been recorded. In 2017, this largest world power introduced over 50 GW of new capacity based on renewable energy sources into its own industry. In general, Asia is a country that occupies a leading position in the rapidly developing market for alternative energy sources.