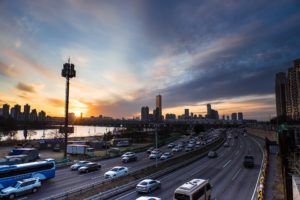 While international corporations are arguing that self-managed cars can change the world and the infrastructure of cities for the better. The city authorities of developed cities in different countries are changing roads, taking into account already existing “green” technologies. Some authorities are striving for a higher energy efficiency indicator, while others seek to protect pedestrians, cyclists and children on the roads. But there are those who are trying to deploy such an infrastructure for electric cars, due to which the driver does not need to think about where the next charge is. That is why we start a series of articles on innovative solutions in different countries that deal with road surface.

Today, we will talk about a unique wireless carriageway for public transport in South Korea. In general, the capital of South Korea – Seoul – is considered one of the most intelligent cities in the world. This is due to the fact that the city government analyzes the needs of local residents and improves living conditions in the city.

Public transport in Seoul goes on a special road surface with the technology Online electric vehicle technology (OLEV). This technology is very relevant in South Korea, where advanced developments come to life. OLEV transmits electricity wirelessly, which allows buses to travel along the route, without stopping charging the battery. Under the pavement are laid electric cables that create a magnetic field. At the bottom of the bus is located a device that turns the magnetic field into electricity. Innovative coverage is 5-15% of the bus route, which is enough for uninterrupted power supply throughout the work shift. The installation and maintenance of new technology does not require replacement of the entire road surface in Seoul. OLEV technology is also used in another city of South Korea – Rubber.

It is worth noting that the new technology is “smart”, so it can distinguish buses from electric cars and automatically switch off at moments of idle time. In addition, the buses are equipped with batteries, which are one third less battery than installed in electric cars.