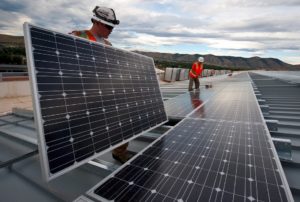 Speaking about solar energy, first of all, it is necessary to mention that it is a renewable energy source, unlike fossil fuels – coal, oil, gas, which are not being restored. According to NASA, about 6.5 billion years old, the inhabitants of the Earth have nothing to worry about – about as much as the Sun will warm our planet with its rays until it explodes.

The potential of solar energy is huge – the surface of the Earth is irradiated with 120 thousand terawatts of sunlight, which is 20 thousand times higher than the world demand for it.

In addition, the solar energy is inexhaustible and constant – it can not be overpaid in the process of meeting the needs of mankind in energy carriers, so that it will be enough in abundance and for the share of future generations.

In addition to other advantages of solar energy, it is available in every point of the world – not only in the equatorial zone of the Earth, but also in the northern latitudes.

In light of the latest trends in the struggle for the ecological purity of the Earth, solar energy is the most promising sector, which partially replaces the energy received from non-renewable fuel resources and, thus, is a fundamental step towards protecting the climate from global warming. The production, transportation, installation and use of solar power plants is practically not accompanied by harmful emissions into the atmosphere. Even if they are present in a small amount, then compared to traditional sources of energy – this is almost zero impact on the environment.

Due to the fact that in systems on the solar resource there are no moving nodes, as, for example, in generators, the generation of electricity is noiseless.

Moving to solar panels as an autonomous energy source, owners of frequent houses receive tangible savings. It is also important that maintenance of solar-powered power systems is characterized by low costs – it is only necessary to clean solar cells several times a year, and the manufacturer’s warranty on them is usually 20-25 years.

Solar energy has a wide range of applications – it is the generation of electricity in regions where there is no connection to a centralized power supply system, and desalination of water in Africa, and even the supply of energy to satellites in near-earth orbit. Not in vain, the solar energy is recently called “folk” – this name reflects the simplicity of its integration into the electricity supply system at home, both in the case of photoelectric and thermal elements.

Every year, technologies in the production of solar cells are becoming more sophisticated – thin-film modules are introduced directly into building materials at the stage of erection of structures. Japanese concern Sharp – the leader in the production of solar panels, recently introduced an innovative system of transparent storage elements for window glazing. Modern achievements in the field of nanotechnology and quantum physics allow us to talk about a possible increase in the power of solar panels in 3 times.