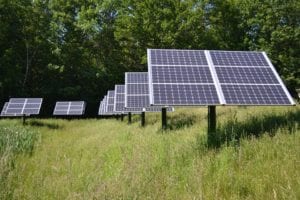 The energy of the sun and the wind is able to fully meet the needs of America already now – a group of American energy researchers in Energy and Ecology magazine said. The list of authors included a climatologist at the Carnegie Institution, Kenneth Caldeira, who is famous for a number of serious work on the environment.

“Our team used a simplified approach aimed at understanding the fundamental geophysical limitations of solar and wind energy,” one of the scientists Matthew Scheiner explained. – We studied the availability of this energy at different times of the day and determined at what hours what proportion of consumption could more effectively cover solar power plants, wind power or storage systems. Then we compared the data with the dynamics of national electricity consumption in a day, “said Steven Davis in turn. – And they found out that a sufficient number of SES and wind farms could cover 80% of the country’s electricity needs. ”

Researchers are convinced that creating the necessary number of solar and wind farms is a realistic task. However, at this stage, their construction and development will require about a hundred billion dollars. Scientists also analyzed the weather throughout the year.
Scientists have approached the production of free “green” energy

According to their data, the peak performance of solar power plants falls to June and July, while wind resources peak in March and April, while in July and August, wind power is declining. That is why covering all the needs with the help of renewable energy is a difficult task. To do this, in order to insure against a lack of energy, it will be necessary to develop reserve capacities, so about 10% of the energy scientists offer to cover with fuel.

Earlier, scientists from the Massachusetts Institute of Technology (MIT) and Fusion Systems said that for 15 years, the United States will produce an unlimited number of almost free and fully renewable energy. According to them, this development will put an end to the dependence of mankind on expensive fossil fuels – primarily oil, coal, fuel shale, natural gas, peat and slow down climate change processes.