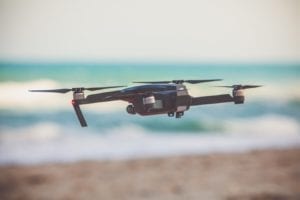 At first it was a game devised and created for drones, but it soon became clear that Israeli development was indispensable for rescue services.

For the first time, the Israeli-American development called First Response was used in September last year to eliminate the effects of the Irma hurricane that hit Florida. It helped identify the victims in flooded areas. Then, when forest fires began in California, First Response warned firefighters to fire.

Now the application, created by the Israeli-American company Edgybees, is used by several United States fire and police departments, as well as in the United Hatzalah Emergency Response System in Israel.

The application helps the rescue services locate, including in hard-to-reach places. Data from high-speed cameras mounted on UAVs, cars and portable devices is summarized in real-time. As a result, a complete and clear picture of the terrain, streets, power lines, infrastructure, as well as distress signals imposed on “live” video is obtained.

From game to instrument for saving lives

It all began in 2016, when the Israeli Adam Scott Kaplan, who in the past held leading positions in high-tech companies such as Xennex, Athoc, Digital Guardian and Tonian, was “drenched with fever,” in other words, he was fascinated by the ideas of drones. This was due to his friend Menashe Khaskin, head of the development department at Amazon Prime Air in Israel, who owns more than three dozen US patents for video, information, computer vision and communications.

At first, Kaplan bought a drone and began filming his daughter during surfing, but soon he was bored with a monotonous topic, and he began to launch his drone, finding new and new objects, starting his drone between stones and trees. “True, when a drone stumbles on a tree, then the tree wins,” he jokes. In the end, together with Menashe, they decided to develop the game and launched it about a year ago.

This game was named Drone Prix, and it became the first, based on the augmented reality for DJI drones users. The game was recognized among the owners of drones, who sought to refine their skills during an entertaining and safe game. This is how the Edgybees company originated, where algorithms of the game were created. Kaplan became her general director, while Haskin and another colleague, Nitya Megides, were co-director and expert in the field of robotics and unmanned aerial vehicles.

Drones instead of helicopters

After a short time, DJI’s security services and the US Fire and Police Department contacted Edgybees to adapt their technology to real-world situations.

Currently, more than 1,000 police units in the United States use drones instead of helicopters. Until recently, unmanned aerial vehicles did not have the technology needed to create video cards in real time. It is this technology that Edgybees can provide. For the first time, lifeboats with software have been used to eliminate the consequences of the Irma hurricane in Florida in September last year. According to Kaplan, they had to work days and nights in order to be able to provide the necessary technological support. The difficulty was also that in hard-to-reach places there was no roaming of mobile communication and maps were created in an autonomous mode.

The Edgybees video card has a significant advantage over the complementary reality that Apple and Google provide mobile devices. Edgybees offers something unique: it’s about expanded reality for streaming video images from drones, automobiles and security cameras.