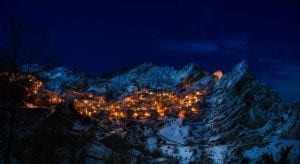 Natural light is the source of life on Earth. Artificial light provides the opportunity to work at night, provides a sense of security, stimulates the senses “decorating” buildings, monuments, alleys, etc. But does the long-lasting disruption of the natural character of the night have no effect on the lives of people, plants and animals? For many years now, scientists have been dreaming about the problem of light pollution, which many people have never heard of, and most likely they are unaware of.

What is light pollution?

Light pollution is caused by disturbing the nocturnal environment by using artificial outdoor lighting. It turns out that this is a problem that can affect the biological cycle of living organisms and not only.

We can distinguish several types of light pollution. Glow of the urban sky (artificial daybreak, light smog) – glow of light in the sky in the urbanized area, which is the sum of artificial light reflected from the surface illuminated or emitted directly into the sky and then dispersed in the Earth’s atmosphere. Undesirable light (stray) – light falling in the wrong places, wrongly set, e.g. falling into the windows of flats. Glow (blinding, over sizing light) – excessive brightness, causing visual discomfort. May cause blurred vision, temporary blinding, conducive to road accidents. This phenomenon is also called a glare. Light disturbances (symphony of lights) – accumulation of light sources, usually located in excessively illuminated areas of cities, characterized by high brightness.

Light pollution is most often caused by external lighting, which:

Abuse of lighting means an increase in electricity production costs, an increase in CO2 emissions and the consumption of mine raw materials – coal for energy production. Light pollution is a major problem for astronomy, obstructing the observation of astronomical objects.

Night and the lives of people, animals and plants
Artificial lighting at night, even relatively weak, can cause various ailments, such as fatigue, stress, feelings of anxiety, insomnia. This can lead to general weakening of the immune system. Melatonin, somatotropin and vasoactive intestinal peptide (VIP) are hormones produced only at night. Melatonin is responsible for the circadian rhythm of the body, especially sleep and periods of wakefulness. Somatropin is growth hormone. In contrast, the VIP hormone is responsible for the correct operation of the stomach and pancreas and dilates blood vessels (reduces blood pressure).

Both in plants and in animals, the life cycle depends on the phenomenon called photoperiodism. This is a phenomenon conditioned by diurnal and seasonal changes in the proportion of darkness and light in the natural biological rhythm. In plants, changes in the length of day and night are responsible for the possibility of their flowering. Plants of the short day (bloom in autumn) require a certain length of uninterrupted night to be able to spend flowers and reproduce. Disruption of their cycle will result in disturbances of reproduction and development of these plants. These plants include, but are not limited to, tobacco, corn, millet, rice and chrysanthemums.

In animals, photoperiodism, among others, regulates the functioning of the reproductive glands. Lack of darkness at night can interfere with spatial orientation of animals, change interrelations between different species and influence psychology, food acquisition, reproduction, communication and other important animal behaviors. In addition, lighting attracts various species of insects or bats, often a deadly trap.

The study of the behavior and metabolism of living organisms in the dark is dealt with by skotobiology.

Frequent fatigue, insomnia or eye pain can be caused by excessive light in our lives. Although it provides security and allows you to extend your working day, it is sometimes worth your own health to return to the correct biological cycle and delve into the darkness and silence of the night, and for relaxation to see the starry sky, while we still have the opportunity.